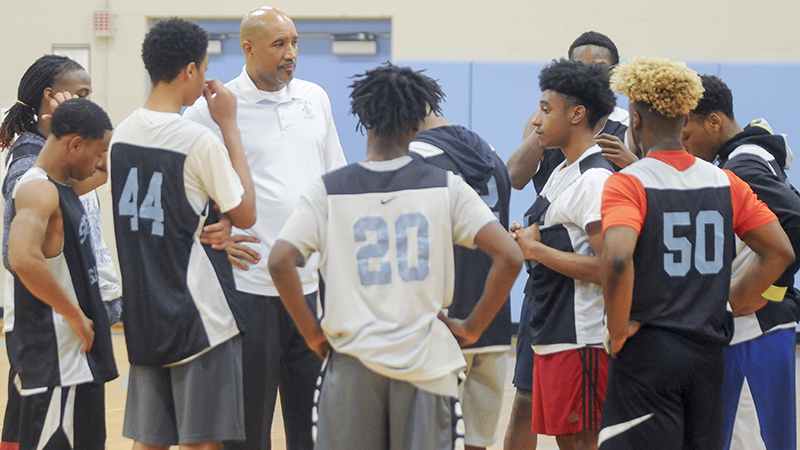 Selma High’s head coach addresses his team in a light practice. The Saints won the regular season area title and are the top seed in the Class 6A Area5 tournament. They earned a bye to the finals on Friday, Feb. 9 at 6 p.m.

The local high school basketball teams have completed their regular season schedules and playoffs begin this week. The win-loss records and rankings no longer have any bearing, because anything can happen in tournaments.

Area tournaments begin this week, and several of the local schools will be competing.

Here is a run-down to show how the area tournaments are shaping up:

• None of the local high school girls teams are hosting an area tournament this season. The Selma High Lady Saints and the Chilton County Lady Tigers both had 3-1 area records. The Lady Saints lost the coin toss to determine the tournament host and No. 1 seed.

• Once teams reach the sub-regional round, the tournament becomes single elimination. Any teams that advance past that round from Dallas County will move on to play in the Central Regional Montgomery at Alabama State University in Montgomery. It’ll take two wins there to move on to Birmingham, which hosts the state semifinals and state championship games.

• Last season, no team from Dallas County made the trip to Birmingham for the state championship. In recent years, at least one local team has made an appearance in the state championship. The Southside boys (2013), Dallas County boys (2014, 2015), Keith girls (2013, 2015, 2016) and Keith boys (2016) have all played in Birmingham in that time frame. The Ellwood Christian boys and the Lady Saints lost in the 2017 Central Regional Final at Alabama State University in Montgomery.

Ellwood Christian will begin tournament play Monday night at 7 p.m. against top-seeded Isabella at Isabella High School. The Lady Eagles only won one game this season, but that one win was against area opponent Maplesville in the second to last game of the season. That win broke a streak of three consecutive losing seasons for the Lady Eagles. Maplesville and Autaugaville will play in the other semifinal. The championship will be Thursday at 6 p.m.

Ellwood Christian went undefeated in area play this season and will host the area tournament. The Eagles will play Isabella on Tuesday, Feb. 6 at 7:30 p.m.

In both matchups this season against Isabella, Ellwood has scored more than 100 points. Maplesville and Autaugaville will match up in the other semi-final game. The championship game will be Friday at 7 p.m.

Keith won’t be hosting the area tournament this year, and will face Francis Marion High School in the first round of the area tournament at R.C. Hatch High School at 6 p.m on Wednesday, Feb. 7. In their last game against Francis Marion, the Lady Bears lost 44-40. Aliceville and R.C. Hatch will play in the other semifinal. The championship game will be Friday at 6 p.m.

Keith will be the No. 3 seed in the area tournament, and will also face Francis Marion in the opening round at 6 p.m. on Thursday, Feb. 8 at Aliceville High School. In the Bears’ last game against Francis Marion, they lost 53-39. Aliceville and R.C. Hatch will play in the other semi-final game at 7:30 p.m. The championship game will be Saturday at 6 p.m.

Southside finished last in the area standings and will be the No. 4 seed in the area tournament. They will face the top-seeded Montevallo in the first round on Tuesday, Feb. 6 at 6 p.m. at Montevallo High School. Prattville Christian and Montgomery Academy will play each other in the other semi-final game. The championship game will be played Thursday at 6 p.m.

The Southside boys finished the season with a 4-2 area record, which tied them for first place with Prattville Christian Academy. The Panthers lost the coin toss, so PCA will host the tournament and be the No. 1 seed. Southside will face Montevallo in the first round of the tournament on Wednesday at 5:30 p.m. In their last game, Southside defeated Montevallo 55-45. Montgomery Academy and Prattville Christian will play in the other semifinal. The championship game will be Friday at 6 p.m.

Dallas County faced Marbury in the first round of the tournament for the second year in a row on Monday night. The Lady Hornets lost both meetings with Marbury during the regular season, and were defeated 66-44 in the tournament. Tournament host Calera and Jemison will play in the other semifinal. The championship game will be Friday at 5 p.m.

Dallas County’s boys team will also be playing Marbury in the first round at Calera. The Hornets will face Marbury, a team they’ve beaten twice this year, in the first round at 5 p.m. on Tuesday, Feb. 6. Jemison and Calera will play in the other semifinal. The championship game will be Friday at 7 p.m.

Since area 5 includes only three teams, the tournament host Chilton County receives a first round bye and will automatically play in the area championship game. Because Selma lost the coin-toss, the Lady Saints were matched up against Stanhope Elmore in the semi-final on Monday, Feb. 5 at 6 p.m. The Lady Saints defeated Stanhope 72-56, and will play Chilton in the finals on Thursday, Feb. 8 at 6 p.m. at Chilton.

Selma lost a three-way coin flip for first place last season, but this year the Saints won first place in the area outright. The Saints earned a bye to the finals, and won’t play until Friday, Feb. 9 at 6 p.m. Stanhope Elmore will play Chilton County in the first-round Tuesday at 6 p.m. to determine who will face Selma for the area tournament championship.