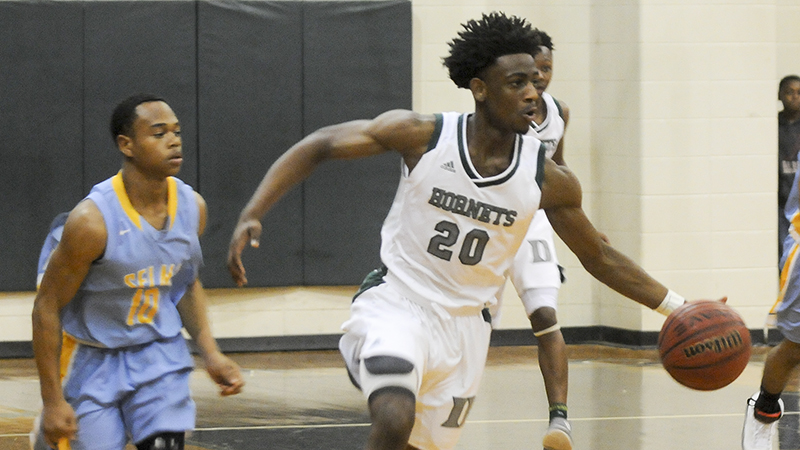 Hornets head coach Cliff Nix and his team wanted this win badly to avenge its 63-58 loss to Selma in the Dallas County Schools Tournament this past December.

“It was a special night for us, and the guys played their hearts out,” Nix said. “We’ve been working as hard as we can to get this, and we want to carry it over to the area tournament.”

The Hornets and the Saints battled with each other from the opening tip. Selma started off strong offensively and outscored Dallas County 19-13 in the first quarter.

However, Dallas County’s offense found its stride in the second quarter to get back into the game. The Hornets’ 20-point second quarter cut the lead down to just 37-33 before half time.

Both teams were making big shots all night, especially from beyond the arc. Dallas County made six 3-pointers in the game, and Kendall Thomas accounted for half of them. Thomas finished the game with 22 points. Chance Lee was second on the team in scoring with 18 points.

Selma’s James Anderson III made four 3-pointers himself. He finished with a game-high 28 points.

The third quarter was just as tight as the second, and the Hornets continued to slowly chip away at Selma’s lead. Selma was leading 55-52 to start the fourth quarter and everyone in the gym was on their feet.

The Saints were able to keep the Hornets at bay until the Hornets finally tied the game 68-68 with 2:16 left on the clock. From that point on, Dallas County answered each Selma score.

The turning point in the game came after Dallas County’s Octavious Palmer’s dunk that tied the score 71-71. On the next play, Anderson was fouled on a three-point shot with 1:08 left in the game. Anderson scored 11 of Selma’s 16 fourth quarter points, but he missed the two free throws that could’ve given his team a three-point lead.

Lee then broke through Selma’s press after the made free throw to put the Hornets up 73-72 with 46 seconds left. Then, back-to-back turnovers led to a fast break layup by Thomas and the game ending dunk by Lee.

“I think we just couldn’t get into a rhythm,” Saints head coach Ronald Lane said. “I think we matched the intensity Dallas County played with, but it just seems like we couldn’t get a call our way under the basket.”

During the girls game, the Lady Saints spoiled Senior Night for the Lady Hornets with a 66-29 win on the road.

“They looked pretty decent tonight,” Lady Saints head coach Anthony Harris said. “My guards do a good job every night, and Dallas County did a good job themselves tonight. It was a good game and they came out to play tonight.”

On defense the Saints had 17 steals, and were able to capitalize on the multiple forced turnovers.

The Lady Hornets got off to a slow start, and dug themselves into a whole they couldn’t get out of, but head coach Eddie Jackson said the team improved their game in the second half.

“I thought in the second half we fought a little harder and we fought back,” Jackson said. “We were down too many points to win the game, but actually gave a better effort than we did in the first half.”