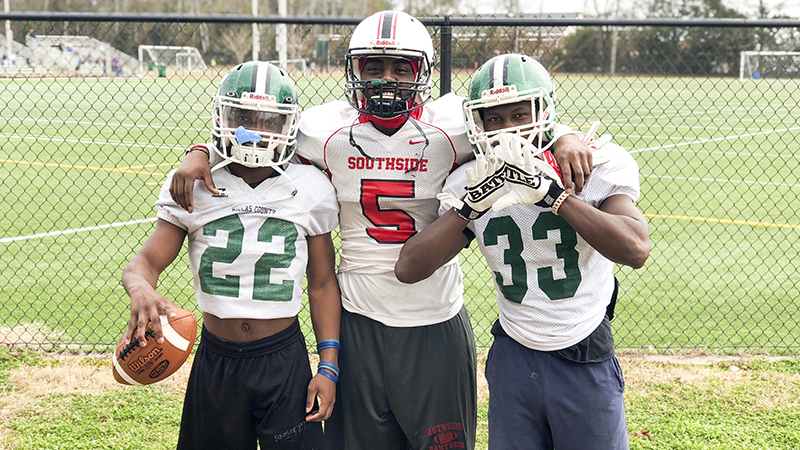 Three football players from the Selma and Dallas County area traveled down to Mobile on Friday afternoon because they were selected to participate in the 2018 Scout Trout All-American Bowl on Sunday, Jan. 28 in Prichard.

Edward Moore Jr., from Southside High School and Dallas County High School’s Calvin Starks and Kenchavious James were invited to participate in the showcase for seniors.

High school seniors from across the country will be split between Team South and Team North for the game.

Moore, Starks and James will be on Team South together for the game.

The boys had their first practice at 8 a.m. on Saturday morning. Afterwards, the boys were treated to a tailgate party before attending the NFL Reese’s Senior Bowl game.

The All-American Bowl kicks off on Sunday at 5 p.m. at Prichard Municipal Stadium, located on 222 Coach W. Harold Clark Drive in Prichard.

This all-star game of high school seniors gives Moore, Starks and James a chance to show off their talents and represent their schools in front of coaches and colleges.

Moore played safety for Southside. He recently recovered from first and second-degree burns that he sustained when he was caught in a kitchen fire this past December. But even then, he was already looking forward to this game.

“It’s been an exciting moment for me. I hope to gain interest from colleges, make new friends and just have fun really.” he said.

“I expect to see some kids that are just as hungry as I am that are ready to eat and show their talent off to these colleges and hope to gain scholarships from it.”

Starks, a Times-Journal first team all-county selection at running back, is also looking forward to gaining some attention from colleges at the bowl game.

Starks finished the season with 1,854 all-purpose yards for the Hornets.

On special teams, he returned a punt and a kickoff for touchdowns.

He made two field goals and made seven PATs.

“It means a lot to me because some people doubted me because of my height,” Starks said.

“It feels good to know that I’m making progress when people doubted me.”

James played rover, a linebacker/ safety hybrid for DCHS. He was both nervous and excited for this new experience, but still ready to go.

“I hope to get scouted,” he said. “I’m just a little nervous, but I’m just going to do what I know to do and everything will be alright.”

Moore, Starks and James are proud to represent their hometown and want to show that there is talent in Black Belt worth looking at.

“It’s good to have people from Selma that can show how good we are and what we’re about,” Starks said. “We’re here to compete and put Selma on the map.”