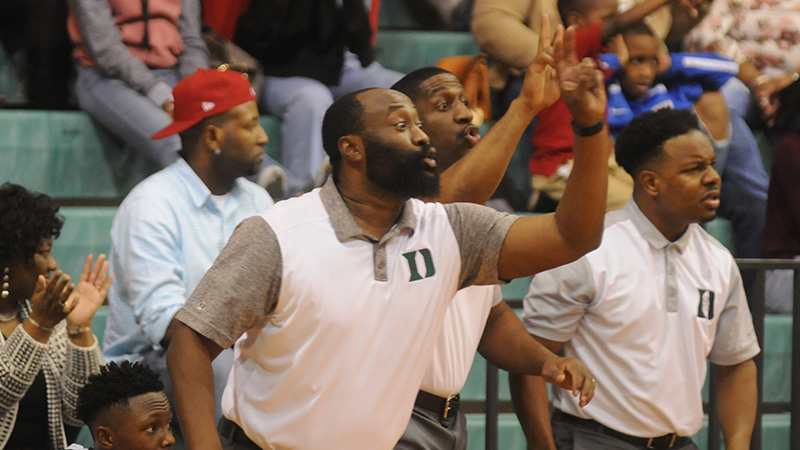 Dallas County boys head coach Cliff Nix calls out a play to his team in the 83-77 win over Keith on Tuesday night.

The Dallas County boys basketball team fought their way through a shootout in an 83-77 win over Keith Tuesday night in Plantersville.

The Hornets defended their home court and prevented the Bears from getting the season sweep against them.

“I told the guys that we needed to get back at some of the teams that beat us in 2017,” Dallas County head coach Cliff Nix said. “Keith has an excellent, well-coached team. They came and played their hearts out.”

However, it wasn’t easy.

The Bears trailed 17-12 at the end of the first quarter, but Tyre Webster knocked down three 3-pointers in the second quarter alone to help give his team a spark.

A last-second layup at the end of the half gave the Bears a 30-31 lead.

After halftime, the shooters from both teams continued to let it fly.

Dallas County guard Kendall Thomas made three of his seven 3-pointers in the third quarter. He led both teams in scoring with 34 points in the game.

On the other side, Keith guard Kendarius Perry answered Thomas’ shots by draining four 3-pointers in the third quarter himself. He finished the game with a team-high 18 points.

The Bears had a 59-55 lead going into the fourth quarter, but the Hornets had the hot hand.

Dallas County outscored Keith 28-12 in the final quarter to complete the comeback.

“We got a little contribution from everybody,” Nix said.

The Lady Hornets, however, were unable to mount a successful comeback in the 41-27 loss to the Lady Bears.

The Lady Hornets were shutout in the opening quarter, and were already down 21-9 at half time.

Something clicked after halftime, and the Lady Hornets scored 15 in the third quarter to cut the lead to 30-24. Big 3-pointers from J’Kiera Peterson, Ebony Simmons and Ke’onnaa Pope helped get Dallas County back into the game.

“We were kind of out of rhythm in that first quarter when we didn’t score any points,” Lady Hornets head coach Eddie Jackson said. “In the third quarter wwe hit a couple shots to get us back into the game, but the first quarter killed us.”

Simmons led the team with 11 points.

Unfortunately, the hot hands went cold in the fourth and the team was only able to score three more points.

Shatavia Moore was the leading force behind the Lady Bears victory with a 20-point night. She was the only Keith player to score in every quarter.

“Shatavia is always going to give us what she has,” Williams said. “But I’ve seen a lot of improvement in Okeemia Lewis. One of my freshman, A’Kese Jones played very well tonight attacking the basket and getting us some late shots in the fourth that put us up.”

Dallas County’s next game will be at home against Calera on Friday, January 12.

Keith’s next game will be a at home against Marion on the same date.