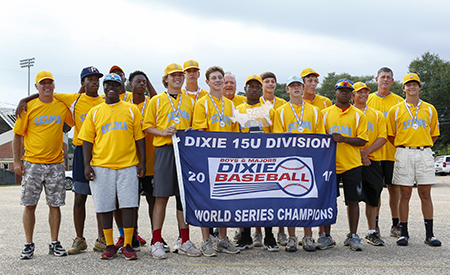 The 15U Selma All-Stars celebrate their World Series victory at Bloch Park surrounded by friends and family.

Editor’s Note: Through Jan. 1, the Times-Journal will look back on the top sports stories of 2017. Here’s the year in review for July- September:

Selma High and Keith were two of 108 AHSAA schools that finished the 2016-17 school year with no fines or ejections across all sports. Each school was honored for their achievement at the 2017 AHSAA Sportsmanship Luncheon in Montgomery this past July.

Dallas County High School hired a head football coach and both a boys and girls head basketball coach just a month before the 2017-18 school year started. DCHS hired Cliff Matthews, who was previously the defensive coordinator at Selma High, to run the football team. Cliff Nix was promoted from his assistant role and took over the boys head basketball coaching position to follow Willie Moore. Eddie Jackson will lead the girls basketball team for DCHS. He won a state championship in 2010 with Sumter County.

Selma’s top baseball talent won the 15U Dixie Baseball World Series in Independence, Louisiana this past July. It had been 45 years since a team from Selma won the World Series. The boys defeated the Hattiesburg team 8-3 to win the championship game.

Several cyclists participating in the Fuller Center Bicycle Adventure stopped in Selma for a night during their cross-country bike ride. The FCBA is a nine-week ride from San Francisco to Savannah, Georgia, that raises money and awareness for The Fuller Center for Housing non-profit. The cyclists rode 53 miles from their previous stop in Demopolis before spending the rest of their day in Selma.

Meadowview Christian’s headmaster Micheal Blair stepped in as the head football coach for the 2017 season to replace Lebo Jones. Blair coached football for 30 years before he went to administration, but he returned to the gridiron since the team needed a coach.

Tyler Duncan refuses to give up on football

Dallas County lineman Tyler Duncan had to hang up his cleats before his senior season could start due to his ongoing struggle with Cushing disease. Despite his multiple efforts to practice through the pain over the last few years, Duncan could no longer ignore the constant pain and injuries. However, instead of quitting, he remained on the team as an assistant and team manager.

The Selma QB Club had a huge night when they invited “The Rick and Bubba Show” to be the guest speakers on Ladies night this past September.

Not only did the club enjoy their guests, but finance chairman Forrest Hatfield surprised everyone with an announcement that the Selma QB Club had set up a $100,000 endowment to both The University of Alabama and Auburn University for future scholarships.

The Keith Bears needed a touchdown to force a second overtime against Southside in the mid-season rival matchup, but Jared Edwards’ 19-yard pass to Kendarius Perry on fourth-and-21 came up just short.

The Southside Panthers won the game 40-32 in one of the most exciting games of the season.