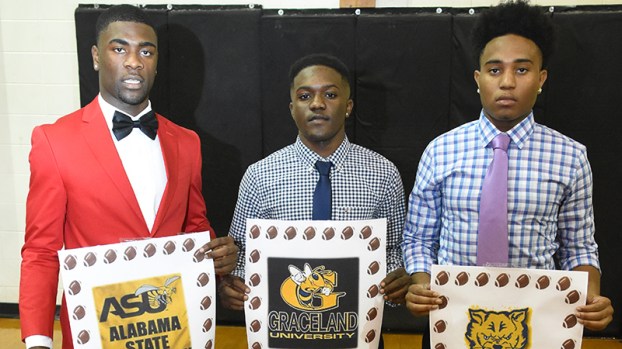 Editor’s Note: Through Jan. 1, the Times-Journal will look back on the top sports stories of 2017. Here’s the year in review for January-March:

Haskell signs to play at UWA

Selma High Lady Saints head coach Anthony Harris won his tenth area championship in 14 years at the school by defeating Stanhope Elmore 64-26. Ta’Sharri Grimes led her team in scoring with 16 points and was an all-area tournament selection. Areyana Williams also made the all-area tournament team and had 14 points in the game. Aaliyah Hatcher also scored in double figures, and scored 12 in the area championship game.

Jeffery Huff Jr. scored the final three points of the game, including a buzzer-beating jump shot, to win the area title 72-70 for the Selma High Saints. The team sprinted across the court in celebration of their win over Stanhope Elmore in the class 6A area 5 championship, according to head coach Ronald Lane. Huff led the team in scoring with 25 points. He and Jacquez Wright were selected to the all-tournament team.

Ellwood Christian defeated Autaugaville 47-40 in the first class 1A, area 5 championship in the school’s history. Duantrey Franklin led the team with 16 points and Loveless Craig earned 13.

Dallas County principal and former state champion basketball coach Willie Moore coached the final game of his career this past Valentine’s Day. Even though DCHS lost 74-63 to Central Tuscaloosa in the sub-regionals. Moore spent 22 years coaching basketball, and won a state championship with DCHS in 2014.

Ellwood Christian basketball earned their first trip to Montgomery after defeating Shades Mountain Christian 87-65 this past February. Loveless Craig scored 34 points to lead his team to the Central Regional at Alabama State University for the first time.

Morgan Academy’s Will Brackin rose to as high as No.28 in the state of Alabama in the boys 16 division according to the United States Tennis Association.

The Senators qualified for state after their opening tournament at Arrowhead Country Club in Montgomery where the team finished in third place. Jones Free, Gus Colvin, Thomas Morris and David Cothran all broke 90, which qualified them for the state tournament.

The women’s team defeated Berea College 70-59 for their sixth women’s basketball championship. Traniya Pitts was the women’s tournament MVP, and scored 23 points in the championship game.

Girls basketball Coach of the Year

Selma High Lady Saints head coach Anthony Harris was named the Times-Journal’s 2017 Girls Basketball Coach of the Year after leading the Lady Saints to a 27-3 record and reaching the state quarterfinals.

Girls basketball Player of the Year

Boys basketball Coach of the Year

Ellwood Christian’s former coach Darrell Walker won the Times-Journals 2017 Boys Basketball Coach of the Year after turning his team around and finish 15-10. The Eagles were three games shy of the 1A state championship last season.

Boys basketball Player of the Year

Loveless Craig was named the Times-Journal’s 2017 Boys Basketball Player of the Year by being one of Ellwood Christian’s top scorers.

Craig was a transfer from Selma High, and he helped lead the Eagles to a class 1A area5 championship.

Coach of the Year: Thacker sets a new bar for Morgan Academy football

The Morgan Academy Senators football team made the playoffs for the first time since 2011 under the leadership of The... read more