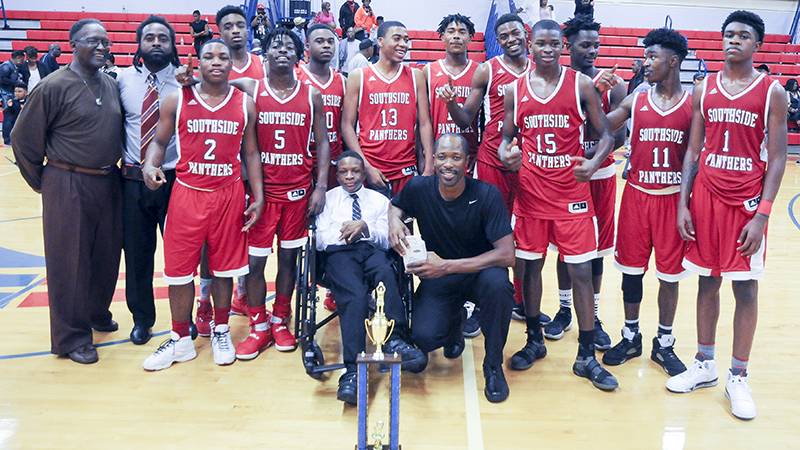 The Southside High Sccool Panthers celebrate their first place finish in the 2017 Dallas County Schools Tournament. They defeated Keith on Thursday and then Selma High in the championship game.

The exciting Dallas County Schools Tournament came to a close Friday night, and both the Selma High Lady Saints and the Southside Panthers boys team came out as champions.

In the final day of the two-day tournament, every team that played gave it their all.

The Lady Saints repeated as county tournament champions with a 54-38 win over the Keith Lady Bears. In their third meeting of the season, the Lady Bears gave their best fight yet.

“Tonight, we played a little sluggish and came out in the third quarter to secure the game,” Lady Saints head coach Anthony Harris said. “I think they came within two in the first half.”

Shatavia Moore led Keith in scoring with nine points, and Jakira Simmons had eight. In previous meetings, Selma was able to put away the Lady Bears early.

This time, however, the Bears were able to stick with Selma a little bit longer. At halftime, Keith was only down 28-21. By the end of the third quarter, they were still within 12 points.

Despite their best efforts, the Lady Saints were inevitably too much to handle.

Ta’Sharri Grimes, the county tournament girls MVP, led the way for the Saints with 18 points and 10 rebounds.

“[Thursday] night Grimes had 19 points. She’ll rebound. She’ll push the ball,” Harris said. “She’s a fighter. She played like an MVP both nights.”

Point guard Kynadra Lewis also finished with 18 points in the game. According to Harris, Lewis could’ve just as easily been awarded the tournament MVP for her performance over the last two days as well.

The Saints are a running team that uses traps to create turnovers that lead to fast break layups. They were able to execute their defense against Keith, which gave them plenty of opportunities to score near the basket.

Selma High had the chance to run the table on the tournament, but the Southside boys had different plans. After defeating Keith, last year’s champions, in the first round, the Panthers defeated the Saints 53-43 to take first place.

“It’s a great joy to win first-place in the tournament,” Southside head coach Lenord Jones said. “I was very impressed with my defense tonight. They played together as a unit.”

Southside had the game from the opening whistle, and ended the first quarter with a 14-5 lead. Selma struggled to make shots and ended up in a whole they couldn’t dig themselves out of.

Southside forward Malik Johnson led everyone in scoring with 18 points. Selma had issues rebounding early and Johnson seemed to always be in the right place for a put back layup.

“I thought we had momentum after the Dallas County win, and we just came out flat,” Selma coach Ronald Lane said. “Southside did what they wanted to do and picked us apart.”

Keshawn Arrington was second in scoring for Southside and finished the game with 14 points.

The Saints didn’t show signs of life until after halftime when they were already down 33-18. In the third quarter, Selma outscored Southside 12-6 thanks to big three-pointers by Korbyn Kelly and James Anderson.

Kelly led the Saints with 11 points and Anderson was right behind him with 10.

The Saints tried their best to chip away at the lead, but Southside was able to keep them at bay by breaking through their full-court trap.

“We tried to dig our way out in the second half, but when you get in a hole like that and you’re not shooting the ball well that’s going to be the end result,” Lane said. “My hat is off to Southside.”

The Keith Bears defeated the Dallas County Hornets 56-44 to win third place in the boys bracket. Leading scorers for the Bears were Arayvion Jones with 14 points and Kendarius Perry with 11. Kendall Thomas led the Hornets in scoring with 13 points and Chance Lee finished with 11.