Coach of the Year: Thacker sets a new bar for Morgan Academy football 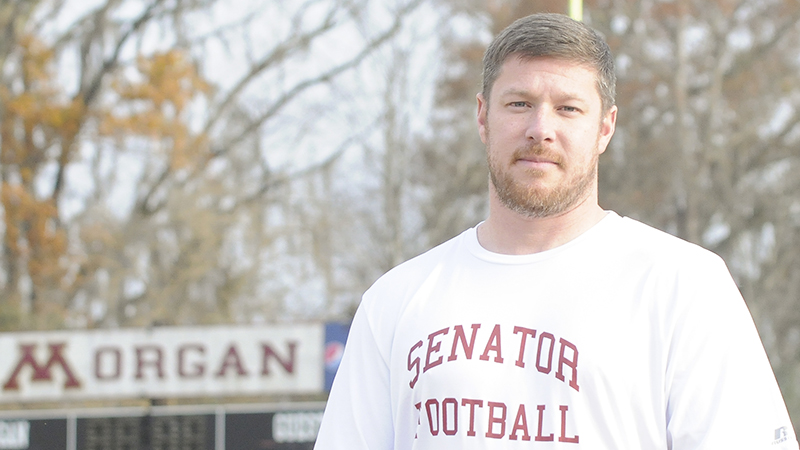 Morgan Academy head coach Josh Thacker led the Senators to their first playoff appearance since 2011, and he also serves as the school’s athletic director. Morgan Academy football finished the season 6-6.

The Morgan Academy Senators football team made the playoffs for the first time since 2011 under the leadership of The Selma Times-Journal’s 2017 Coach of the Year Josh Thacker.

In his second season with the team, the team has won more games than they have in each of the past five seasons and they advanced to the second round of the playoffs. The Senators were the only local team to reach the second round this season.

“The main goal of the season was to build confidence in the guys and try to instill a mentality, a certain type of attitude in the players, and I think we were able to accomplish that,” Thacker said.

This year, the Senators defeated Marengo Academy, Hooper Academy, Clarke Prep, Northside Methodist Academy, Pike Liberal Arts and then Glenwood School in the first round of the playoffs. In the semi-finals of the AISA playoffs, they lost to the state champion, Monroe Academy.

Thacker’s offense averaged 24.4 points per game, and the defense allowed 22.4 per game to opponents. His quarterback Peyton Egbert threw for 1,398 yards and 17 touchdowns, while his leading running back Sam Brackin rushed for 1,023 yards and seven touchdowns.

Morgan Academy. Two of his players, Brackin and Sam Plummer, were selected to play in the Cramton Bowl in Montgomery for the AISA All-Star game.

Thacker reset the bar for Morgan Academy football, but the way he did it goes beyond the gridiron. He convinced his team that they weren’t only good players, but they had a shot to prove it. Thacker could tell there was a change in how his team approached the game heading into year two.

“One of the biggest differences that I’ve noticed in these guys in my two years here, is they started believing,” Thacker said. “They started having a quiet confidence about them that they knew they could compete with anybody in the AISA.”

Morgan Academy headmaster Mark Knight, who also joined the school in 2016, praised Thacker’s ability to step in and address the discipline concerns from the start.

“We came in together, and the board wanted us to instill discipline, and coach Thacker has done a really good job with that,” he said.

In addition to getting the football program headed in the right direction, Thacker is also the school’s athletic director as well.

“He’s done a really good job, I hope he stays with us,” Knight said. “He’s one of the brighter young coaches. At only 33-years old, he’s got a bright future ahead of him.”

Getting through the 2017 season wasn’t an easy task for the Senators. Not only did they face a tough AISA 3A schedule, but the team had to fight through multiple injuries for two-thirds of the season. According to Thacker, the team wasn’t at full health until mid-October.

It took a while, but as the team’s playoff chances increased, so did the fan’s excitement for the team.

“Everybody was excited, because they haven’t done that in years,” Knight said. “The future is bright if folks here are patient with him.”

While the resurgence of Morgan Academy football was fun to watch, it is the behind-the-scenes work that made everything that much more impressive.

Not only was Thacker leading an entire athletic program, but he also became a husband and a father during the offseason. His first-born son, Wallace Thacker was born on March 29, and he married his wife Kayla Thacker on July 22. But it doesn’t stop there. Both he and Kayla are pursuing their master’s degrees as well. Josh has started on his master’s in Student Affairs in Higher Education at University of West Alabama, while Kayla is working on her master’s in General Education at Auburn University at Montgomery.

Even though they have a lot on their plate, Josh says that his Morgan football team has been right there with him. And that is what makes Thacker’s success and relationship with his team so special. The first-time parent has managed to build a larger extended family through football.

It’s evident in the way the boys respond and interact with him as well. According to Thacker, he received calls and texts from his players checking on him and Kayla before the baby was born. Players, managers and cheerleaders attended his wedding.

The way he talks about his players, it sounds like Wallace is only his first child by blood.

“These are the kinds of guys you see on Monday working their rear-ends off in football. On Wednesday, they’re in a classroom making good grades. On Friday night, they’re killing themselves trying to please people and on Sunday they’re in a church pew,” he said. “It’s just a special bunch, and to see them grow really means so much as a coach.”

This was a great year for Morgan football, but success is about building on what you’ve done according to the coach. Thacker was 5-6 in his first year and 6-6 in 2017. The best records for the team since 2011. He knows it’ll be difficult, but Thacker is optimistic for the future of his program.

“It’s easy to do it once, but it just gets tougher and tougher the more that you start winning and the expectations start to rise,” he said. “The future can be bright for Morgan if we continue to work hard.”

Congratulations to the Times-Journal’s football Coach of the Year, Josh Thacker.