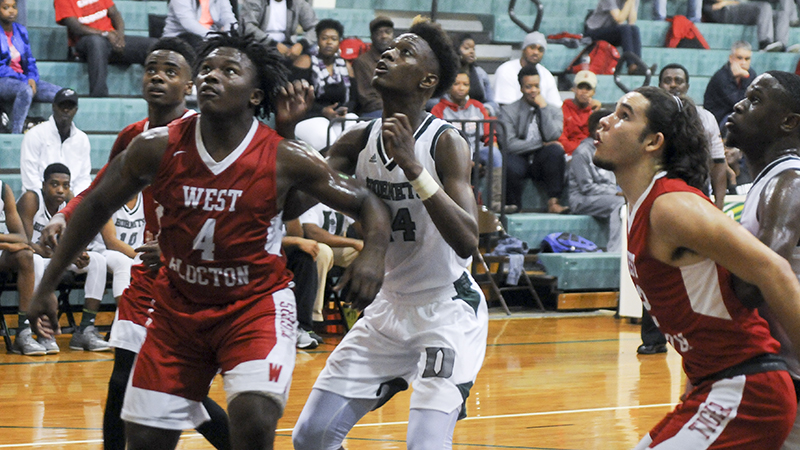 Dallas County forward Octavious Palmer waits for his chance to rebound the ball between two West Blocton defenders in Tuesday night’s 75-65 win. The Hornets are now 4-6 this season.

The girls improved their record to 4-6 with a decisive 58-22 win over the Lady Tigers, while the boys scrapped their way through a physical game to defeat West Blocton 75-65.

The Lady Hornets jumped out to a 15-5 lead in the first quarter, and didn’t look back.

“I think it was a pretty good performance by our starters,” head coach Eddie Jackson said. “We came out, got the lead.”

Junior guard Ebony Simmons led the team with 22 points, and she only missed one of her five free throws. Her teammate J’Kiera Peterson was second on the team in scoring with nine points.

“Ebony’s been up-and-down this season, but she’s our best scorer,” Jackson said. “As she goes, the team goes. If she doesn’t score, then we struggle to win ball games.”

Jackson was able to give his reserve players more playing time than usual. Even though the Lady Tigers were able to score against the second unit, they were too deep in the hole to catch up to the Lady Hornets.

“We got a chance for most of our younger players to get some experience,” Jackson said.

Dallas County’s defense gave up 13 points in the second quarter, but held them to just two points in both the third and fourth quarters.

During halftime, Jackson advised his team to just keep the game simple. He didn’t want to over complicate things for his players, and wanted to make sure they maintained control of the game.

The game was a nice cool down for the starters as they prepare for the upcoming tournament.

“The county tournament is going to be tough like it always is,” Jackson said. “We have Selma at 3:30 p.m. [on Thursday]. It’s going to be a tough ball game, but we’re going to play hard.”

The boys team also got off to a fast start against West Blocton, and played an excellent first quarter.

Center LaDarius Furlow was controlling the boards, while Kendall Thomas (2), Meeko Tyre, Octavious Palmer and Chance Lee drained three-pointers to give the Hornets a 21-14 lead.

However, the team went cold from beyond the arc for the remainder of the half and failure to secure rebounds became an issue.

The Tigers were given multiple second, third and sometimes fourth chances to score in the second quarter because the Hornets had trouble keeping possession of their rebounds.

“We’ve been having that problem all year,” boys head coach Cliff Nix said. “We’ve been a good first half team, but then we come out in the second half looking sloppy. We’re still working to put a whole game together.”

West Blocton flipped the script in the second quarter and outscored Dallas County 20-14.

At halftime, the Hornets only had a 35-34 lead. The Tigers surge was led by their leading scorer Rodney Crymes, who had 18 points at halftime.

After halftime ended, the Hornets slowly began to create separation between themselves and the Tigers. Chance Lee led Dallas County with 26 points on the night, and Furlow had 15. The cold shooting only lasted for a spell.

The physicality of the Tigers defense backfired on them and gave the Hornets 19 attempts from the free throw line in the second half. West Blocton had three players with four fouls and one of the Tigers fouled out of the game. Even though they only made 12 of their second half free throws, it was enough to make up for the continued struggles on the glass.

“They were playing aggressive on us all night long, and it played in our advantage toward the end of the game when we were able to go to the free throw line.”

The Hornets are now 4-6 this season, but they are heading into a tough county tournament with much to be improved upon according to Nix.

“It was a good game for us going into the county tournament, and getting ready for the second half of the season starting the new year,” he said. “All I can say about the county tournament is that we got to come playing better than that, or we’ll be in the losing bracket pretty quick.”

Selma High Boys lost on the road to Demopolis 57-48. Christopher Carter led the Saints with 19 points and J.D. Whitlock had eight.