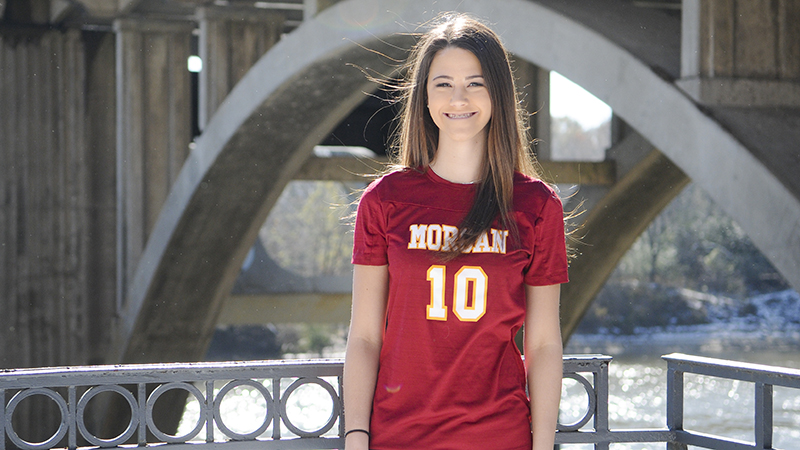 Morgan Academy’s Regan Hewitt, a senior, was selected as the Times-Journal’s Player of the Year. She helped lead the Senators to a successful season.

Hewitt was one of just three seniors on her team, and helped lead the Senators to a successful season. She played outside and middle hitter for Morgan Academy, and was a threat at the net. Morgan Academy head coach Kayla Thacker said she had a sense for finding holes in the defense and taking advantage of them. In the two years that she’s coached Hewitt, Thacker has also witnessed her ability to lead her team.

“The team voted for her as a team captain, which I think was great,” Thacker said. “All three seniors stepped up and did their part when necessary, but she really stepped up and had everybody’s back and picked them up when they were down. She grew as a player and a person.”

Hewitt said she’s been working hard on her volleyball skills since the seventh grade, so it meant a lot to her to be chosen as the captain for her team.

“I’m really glad that they voted for me,” she said. “It’s just an honor and a blessing to be chosen by them.”

Her great play earned her an all-tournament team selection during the regional tournament. She was also selected to play in the AISA All-Star game at Lee-Scott Academy in Auburn this past October.

“She does everything in her physical and mental power to do what she can to try to win a ball game,” Thacker said. “She puts forth great effort and builds the team up. She’s just what you would want in a player all-around.”

Like any true competitor, Hewitt’s most memorable games were the tough rivalry wins against good teams. The Senators beat Clarke Prep in Grove Hill this season, and it meant a lot to her and the team.

“They’ve been our rivals for the past few years, and they’re a really good team,” she said. “We went to Grove Hill and we beat them for the first time and it was amazing.”

Somehow, Hewitt has been playing through a back injury for the past couple of seasons. She did everything she could to manage the injury just so she could play through her senior year. She said she would use ice, heat pads and just try to rest it as much as she could because she didn’t want to miss her senior year.

Congratulations to Regan Hewitt on being named the volleyball Player of the Year.