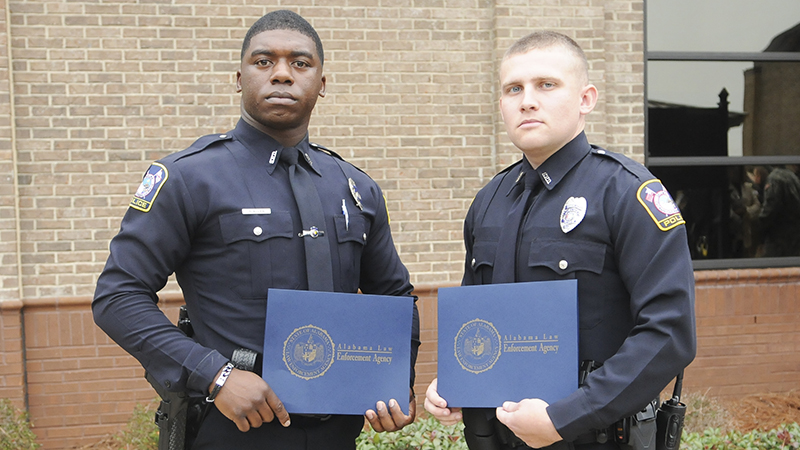 Officers Darryl Allen and Austin Pickett graduated from the Alabama Police Academy at Wallace Community College Selma Thursday. They are part of the 160th class, which included a total of 41 graduates. The Selma Police Department hopes to send six more new officers to the academy in January.

Two Selma Police officers are ready to hit the streets after graduating from the Alabama Police Academy at Wallace Community College Selma Thursday.

Darryl Allen and Austin Pickett, who were hired by the department in July, started the academy in September and are now certified police officers. They were part of the 160th class, which graduated a total of 41.

“I’m proud. I’ve been striving for it for a couple of years now and finally achieved it,” Pickett said. “I made my family proud. I’m ready to go out and do what I’ve learned here now.”

After the graduates received their certificates, they took their oath of office, which was followed by a standing ovation from family, friends and fellow law enforcement officers in the crowd.

The academy trains recruits and prepares them to be certified law enforcement officers.

“Starting out it gets pretty rough. It makes you question and wonder why you really want to do it, but it all works out in the end,” Pickett said.

“A couple of weeks in you figure out if this is what you want to do or not.”

“I’m just ready to get out there and do my job and help the community of Selma,” Allen said.

Pickett, who is from Thorsby, said he has been in public service since he was a teenager, and law enforcement was something he has wanted to do for a while.

“I’ve always been in public service,” Pickett said. “I started out when I was 13 or 14 years old as a volunteer firefighter.”

Allen, a Selma native and graduate of Selma High School, thought about getting into law enforcement because his grandfather is a deputy sheriff in Georgia.

“It’s kind of in my blood, and you have to have the willpower to want to help people. That’s exactly what I have,” Allen said. “It’s a calling. I feel like God places people in your life to steer you in different directions, and he places it in your heart to do something like this.”

“Being that numbers have been low in Selma and we have a high turnover rate, it’s always good when you add two or three or however many officers,” said Sgt. Mark Neely, public information officer with the Selma Police Department.

“The more people we have, the more we’re able to get out and help the community.”

Neely said the department recently hired four new officers and have a few others in the hiring process.

“Hopefully by time Jan. 22 comes around, which is the next academy, we’ll have possibly six going in,” Neely said.

“If we can get those graduated, that’d be another big milestone in Selma.”