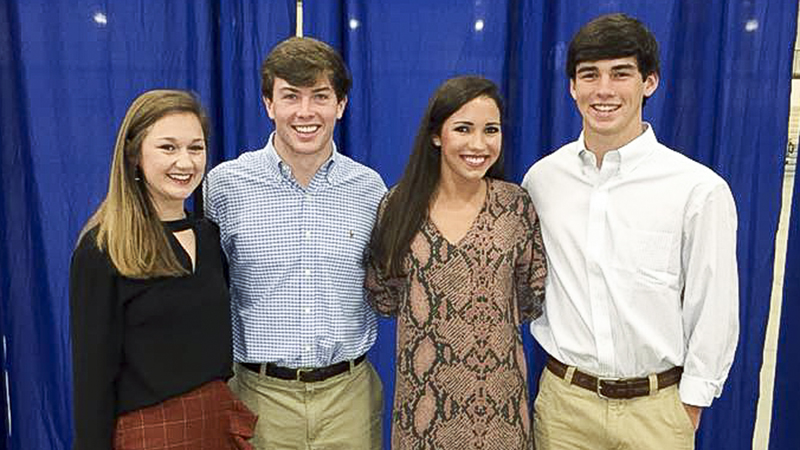 Louise Stewart, Sam Brackin, La La Plummer and Sam Plummer representing Morgan Academy at the Cramton Bowl banquet before the All-Star Game. Stewart and La La were UCA All-American cheerleaders, while Brackin and Sam Plummer led the football team back to the playoffs.

The student-athletes were selected to represent the AISA West All-Star team.

“It was great. They had a good week and a fun time together,” Morgan Academy athletic director Josh Thacker said. “They represented our school and the AISA with a lot of class. We’re very proud of them.”

In preparation for the game, the student-athletes reported to Montgomery the Wednesday before and attended practices and meetings. There was also a banquet dinner held to honor the all-star selections before the game.

Brackin and Plummer were two of the 44 players invited to play for the West All-Star team. It was a major accomplishment for both of the Morgan athletes who helped their team reach the playoffs for the first time since 2011.

The Morgan players lined up alongside former opponents in an unusual, but fun game. The West All-Stars defeated the East All-Stars 38-0.

“Plummer had a great diving catch and Sam’s yards per carry were way up there, so it was a good night for both of them,” Thacker said. “Both of them got ample playing time. It was a fun time for them. One last time to put the pads on together.”

Brackin ran for 1,023 yards and seven touchdowns, and he caught 14 passes for 233 yards and four receiving touchdowns. Making the all-star team was a big accomplishment for the senior running back who was bouncing back from an ACL injury he suffered late in his junior year.

“[Making the all-star team] was a goal of mine since the ninth grade,” he said. “When I tore my ACL, and went from where I couldn’t really walk to having to rehab it and comeback to football, it’s always kind of in the back of your mind that you aren’t as good as you were the year before… But being able to come back and go to the all-star game, it was a great accomplishment. It definitely meant a lot.”

In the Crampton Bowl, Brackin rushed five times for 50 yards.

Plummer played both sides of the ball as a wide receiver and a defensive back for the Senators in his senior season. He caught three passes for 65 yards in the all-star game.

“It was fun playing with all the guys that I’ve been playing against my whole life,” he said. “Me and Brackin have been playing together forever, so we just tried our best to represent Morgan in a good way.”

La-La and Stewart helped the Morgan cheerleaders take first-place at the UCA camp at Huntingdon College this past July. As a team, they were named the West Camp Champs and took first place in extreme routine, cheer, sideline and game day. The two all-stars were named UCA All-Americans as well.

“Those two girls are two fun-loving, free-spirits that come from great families,” Thacker said. “They did a great job also. They were a part of a state champion cheerleading squad at Morgan, so it was a nice way to round out their career with Morgan Academy cheer leading.”