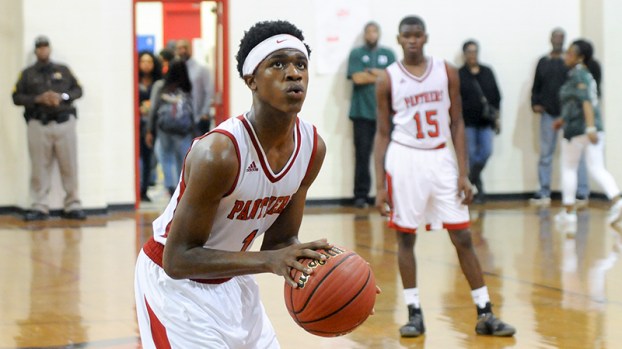 Southside guard Keshawn Arrington lines up his free throw in the 70-61 win over Dallas County. Arrington led his team with 20 points.

Southside gets much needed wins over rival Dallas County

The Lady Panthers started the night with a close 36-32 win over the Lady Hornets. The first quarter was even-keeled with Southside scoring nine points and Dallas County scoring 11.

However, the Lady Hornets scoring pace slowed severely in the second quarter as they were only able to add four more points to their total. Southside took advantage of their opponent’s weak quarter and took an 18-15 lead into halftime.

“We hadn’t had a lead all year,” Lady Panthers head coach Rand Smith said. “It worked out in the end. Dallas County played hard to the end.”

The Lady Panthers attacked early in the third quarter, but came to a halt after putting up 14 points in the first seven minutes.

Lady Hornets guard Kim’Misha McGhee hit a three-pointer with a minute left to end Dallas County’s third quarter drought. Her shot re-ignited the Lady Hornets offense and started a 13-0 run that cut Southside’s lead down to 32-28 with 2:32 left in the fourth quarter.

“We played pretty good defense on them in the second quarter and stopped the run, and then in the fourth quarter we scored some points to get back into the basketball game,” Lady Hornets head coach Eddie Jackson said.

The Lady Panthers’ poor free throw shooting in the fourth quarter kept hope alive for the Lady Hornets. Southside made only two free throws on 11 attempts in the quarter, but they managed to hold on to their lead using their defense. The Lady Hornets were down by three with 30 seconds left in the game and guard Ebony Simmons tried to drive for a quick score, but missed. After Southside’s Christina Watts made one of her free throws to extend the lead to 36-32, Simmons had one more chance. Again, she drove inside and missed as the time expired.

“We played really good tonight. We had some minor turnovers at the end of the ball game that kind of cost us,” Jackson said. “I’m satisfied with the effort, but we’re never satisfied with a loss.”

The Lady Panthers were led in scoring by Kylan Brown, who had 16 points, and Watts, who finished the game with 11. Simmons led the Lady Hornets in scoring with 14.

“We’ve just been working hard, and we’ve come out on the short end of the stick too many times,” Smith said. “I’ve been preaching to them to keep working hard and believe in what we’re doing. It finally paid off for us tonight.”

The Lady Panthers were excited not only to be at local rival, but also to complete a game where they held the lead.

The Southside boy’s team had a better night controlling the tempo of their game and defeated Dallas County 70-61.

After the first quarter ended in a 18-18 tie, the Panthers were able to utilize their perimeter scoring to get an advantage against the taller Hornets. The Panthers made seven three-pointers in the game. The Hornets made four three’s, but three of them came in the first half.

Keshawn Arrington and Derrick Griffin led the way for the Panthers on offense scoring 20 and 17 points respectively.

“Derrick Griffin is the type of player that if he hits those first two or three jump shots, then he’s going to play good,” Panthers head coach Lenord Jones said. “I was impressed with his play tonight.”

The second quarter was played fairly tightly as well, but Southside guard Rickey Webster’s three-pointer to end the half helped the Panthers separate themselves with a 38-31 lead.

After halftime, Dallas County head coach Cliff Nix got the team re-focused on the original game plan of getting the ball inside to the biggest man on the floor, Ladarius Furlow. The combination of working inside and playing a more aggressive full court trap helped the Hornets reduce the lead to 42-40 with 4:23 left in the third quarter.

“I think we played good at times,” Nix said. “We turned the ball over a little too much. At times, we looked really good, and at times, we played a little sloppy. We’re going to correct that.”

However, the Panthers made the right adjustments and were still able to find their shooters. At the end of the third quarter, the Panthers distanced themselves with a 58-46 lead and never looked back.

“They pulled it out with defense,” Jones said. “They played hard defense and they played together tonight. I was impressed with the team effort.”

The Dallas County Hornets face Marbury High School on Friday, Dec. 8 in Plantersville, and the Panthers will travel to Orrville to face Keith High School.

Nearly six months after Riverdale Credit Union was placed into a conservatorship for “unsafe and unsound practices,” the credit union... read more