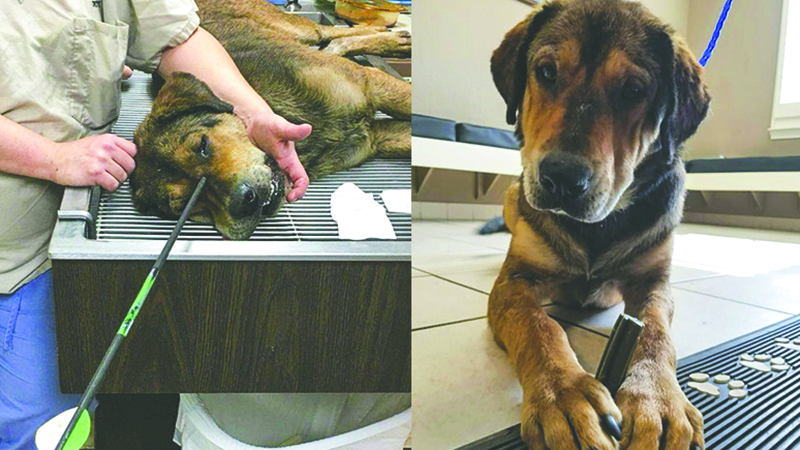 A dog that was shot in the head with an arrow earlier this week is expected to make a full recovery.

Wannabe Rescued Inc., a local animal rescue, took in a dog this week that had been shot in the head with an arrow.

The dog, a stray that frequently slept in the Orrville dump, was picked up by animal control officers.

Two people had been feeding and watering the dog daily, and they discovered the dog with the arrow still lodged in its head Tuesday morning.

The incident is being investigated by the Dallas County Sheriff’s Office.

The dog was transported by animal control to Wannabe Rescued to be cared for by a veterinarian, who removed the arrow from the dog’s head and administered pain medication and antibiotics.

The dog, which has now been named “Arrow,” received the medical attention he needed in large part thanks to donations coordinated by the animal rescue’s Gofundme page and Facebook page.

Arrow is now making great strides in his recovery process, according to Lorraine Alexander, vice president of Wannabe Rescued.

“We have had a great response from the community with Arrow,” Alexander said.  “The veterinarian says he is making good progress and slowly getting his appetite back.”

With Arrow’s health improving, Alexander and other staff members felt confident that it was time to begin the adoption process to make sure Arrow would not end up back on the streets.

Once the rescue is confident Arrow has recovered, he will be making a trip up to Illinois to spend some time at a rescue that Wannabe Rescued often coordinates with.

From there, he will go on to a foster home before ultimately being adopted into a permanent home.

“People will want him. It is not going to take a long time for someone to adopt him because he really is a sweet dog. He just needs socialization, because he is still a little scared given everything he has been through,” Alexander said.

While Arrow gets ready to start a new page of his life, the person or people behind his abuse have yet to be found.