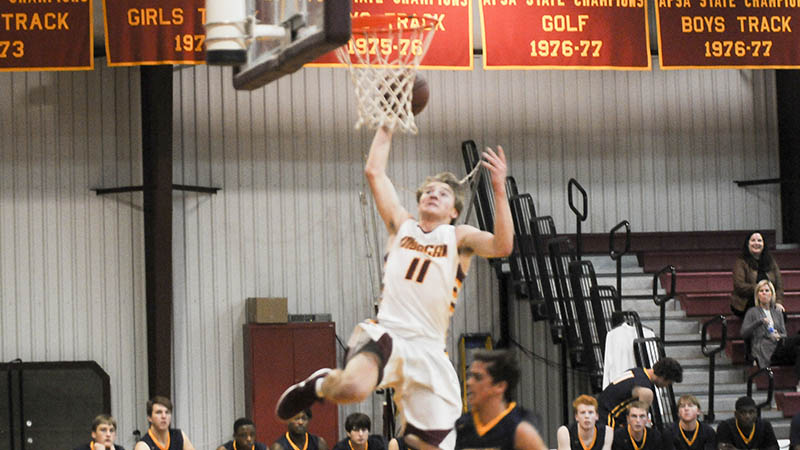 Morgan Academy junior Gunnar Henderson rises up for a dunk in the 63-55 win over Tuscaloosa Academy on Tuesday night’s home opener.

The girls team, coached by Kayla Thacker, jumped out to a quick 4-0 start, but the Knights overpowered them with perimeter shooting for the rest of the game.

The girls were down 38-12 at halftime. They struggled to find open shots against a lengthier Tuscaloosa team.

Grace Pelphrey led the Knights in scoring with 23 points. She made five three-pointers in the first half alone.

The Senators were led in scoring by Abigail Lane with 10 points.

“Tonight, we did really well with what we can do,” Thacker said. “We have a lot to build off of, and a lot of new people. Tuscaloosa’s a really good team with really good shooters, and we know what we have to work on now.”

The boys, on the other hand, played a much tighter game. Both teams took turns exchanging leads until the final minutes of the fourth quarter.

“We played outstanding, but we missed 20 free throws,” Morgan head coach Mark Knight said. “I’m a little concerned about that, but I’m proud of my guys… They’re a little rusty with their shots, but I think we’re going to come around.”

The highlight of the night was high fast break dunk in the second quarter that fired up the student section. Britton Adams was second on the team in scoring and finished the game with 12 points.

“[Gunnar] was a big spark tonight,” Knight said, “But it was a total team effort. Our guys got after it pretty good.”

The Senators played more aggressively in the second-half, but weren’t able to pull away until the final two-minutes of the game.

“We decided to start trapping a little bit… they were hurting us on the wing, so I went to a 1-2-2 look to try and take that wing shot away,” Knight said.