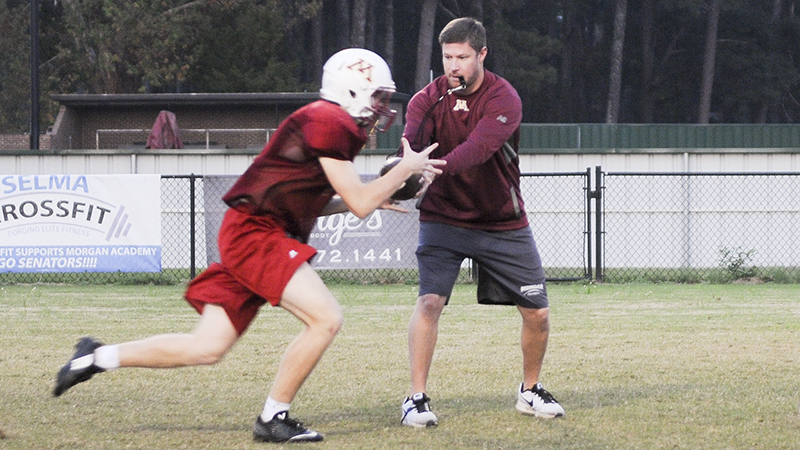 Morgan Academy head coach Josh Thacker hands the ball off in practice to help his team prepare for their semi-final playoff game against Monroe Academy this Friday night.

The Morgan Academy Senators (6-5) have made it to the second round of the playoffs for the first time since 2011.

“It’s a good feeling,” Morgan running back Sam Brackin said. “To come this far means a lot to us, so we’ve been practicing all week and preparing for the second round.”

In head coach Josh Thacker’s second season with the team, Morgan finished second in the AISA 3A Region 2 standings with a 3-2 region record. Last season they were just 1-4 in region games.

The turn-around has both the school and the community excited about this year’s Senators football team.

“There’s a lot of excitement in the community and the school,” Thacker said. “School spirit is high, and it’s a fun time for these guys. These guys have never been able to experience something like this…We want this so bad for our guys, our community and our school. Morale has been really high this week.”

To make it to the second round, the Senators defeated the Glenwood School Gators in a re-match. In week five, the Gators defeated Morgan by just 10 points in a game that could’ve gone either way. However, the Senators returned the favor when it mattered most in the opening round of the playoffs with a 21-14 win.

“It’s been really exciting for these guys to know that they have a chance to get Morgan back on top, and it’s because of the hard work that they’ve done,” Thacker said.

Coincidentally, Glenwood was the team that bounced Morgan out of the playoffs back in 2011.

Now that they have surpassed that hurdle, another difficult re-match against the Monroe Academy Volunteers (11-0) awaits the Senators in the semi-finals.

The Volunteers are undefeated, and defeated Morgan 56-20 back in week three of the season.

They are a talented team that has scored more than 40 points per game while only allowing 11.8 to opponents all season long.

According to Thacker, facing Monroe means competing against a well-coached and disciplined football team.

“The biggest thing that we’ve got to do on Friday night is we’ve got to come out and control the clock, the time of possession and do our jobs,” Thacker said. “We as coaches have to be as prepared as possible.”