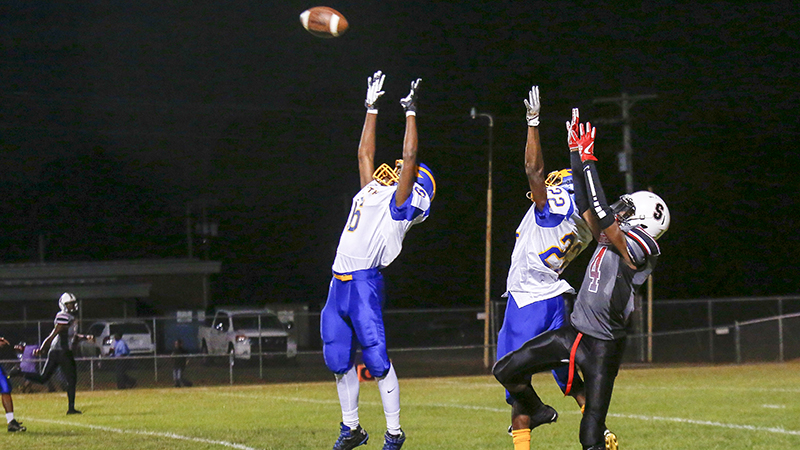 Keith defensive backs Kendarius Perry and Jeashan Black attempt to break up a pass in the game against Southside. The Bears can take over second place in the region with a win against Thorsby on Friday night.

The Keith High School Bears (5-3) have already clinched a spot in the playoffs, but the final region game of the season against the Thorsby Rebels (6-1) on Friday night in Orrville will determine who takes second place in the region standings and gets to host the opening round of the playoffs.

“We realize we have a job to do, and job No. 1 is trying to get a win,” Keith head coach Harry Crum said. “It would be great for our football team as a whole, and it will also solidify second place in the region. That’s our ambition.”

Both teams are 4-1 in region games, and only trail Aliceville in the Class 2A Region 4 standings.

According to Crum, the Rebels are one of the top teams in the state and the Bears will need to play mistake free football in order to get a win.

Keith has been clicking on offense and leads the rest of the region in points scored (277) this season. In each of their last five games, the Bears have scored more than 30 points.

Keith’s offense is centered around their rushing attack, and they have multiple weapons that create problems for opponents. Running backs Jeashan Black, Ty’Quarius Murray and Levi Thomas are more than capable of breaking open big plays in the running game.

The team is also undefeated at home this season, and Thorsby will be a tough opponent on their homecoming night.

Last year, the Rebels were 1-9 and lost 34-12 to the Bears. This year, they’ve only lost one game and they’re averaging 34 points per game.

The Rebels have the second-best defense in the region, and have only allowed 80 points to regional opponents this season.

“We know we’re playing against a team that can really play, and they’re just as excited about winning as we are,” Crum said. “I know that Thorsby is going to be better than what they were last year.”

This will big a big night for the Bears. The excitement surrounding homecoming and the potential playoff implications makes this matchup even more interesting as the regular season winds down.

“Our kids are hyped about this game,” Crum said. “They know what’s at stake. That would be a big shot in the arm for our team, our school and our community if we can win this game Thursday night and host a playoff game.

The Southside High School Panthers (5-3) will host the Central Coosa Cougars (0-8) Thursday night for their last region game of the year on senior night.

The Panthers tied for third place in Class 3A Region 3, and have made it to the playoffs for the second year in a row.

“Now that we’ve made the playoffs in back-to-back years, that’s awesome,” Southside head coach Daniel Flowers said. “These guys are the reason why we’re going back-to-back.”

The Panthers will be without quarterback/ wide receiver Gneil Johnson, who suffered a leg injury in last week’s game, and their starting center Jermaine Savage, who had eye surgery this past Tuesday.

Even though the team already has the playoff spot locked up, Flowers and the Panthers are still motivated to beat the Cougars after their 33-18 loss in 2016. Last season, the Central Coosa game put Southside in a three way tie for third and fourth place, according to Flowers.

“It’s payback week,” he said. “We really want to beat these guys. It’s not going to be a letdown. This game, we’ve been talking about since last year.”

The Selma High Saints (4-4) will not make the playoffs, but they still have the opportunity to finish the season with a winning record. The Saints will play against the Hillcrest Tuscaloosa Patriots (6-2) on Friday night in Tuscaloosa for the final region game of the season.

“My attention right now is on that we have been officially eliminated from the playoffs,” Saints head coach Christopher Raymond said. “We’re in the process of trying to keep gaining experience for the upcoming season. We’re going to continue to strive to get better.”

According to Raymond, the Saints only have 10 seniors, so he’ll have a lot of returning players to work with next season. The coach is excited to see how good they will be next year considering the jump in progress they made this year.

Selma High went 1-9 last season, and showed tangible signs of improvement in their first year with Raymond as the head coach.

“I think we’re ahead of where we wanted to be,” Raymond said. “We still have an opportunity to have a winning season, so it’s plenty for us there to keep fighting and keep striving for.”

Hillcrest Tuscaloosa has the best defense in the Class 6A Region 4 standings allowing just 42 points per game to regional opponents.

The Dallas County Hornets (1-7) host the Central Tuscaloosa Falcons (3-5) for the final region matchup of their season Friday night.

After making the playoffs in both 2015 and 2016, the Hornets will not advance to the playoffs.

The team struggled through the schedule this year, but head coach Cliff Matthews still wants his team focused on finishing the year out.

“We just want to finish strong with the season and let the seniors help lead the younger guys in doing the right things,” Matthews said. “We’re just going to line-up and play football.”

According to Matthews, Central Tuscaloosa likes to run the ball straight at the defense. He said the key will be to keep his defense off the field as much as possible by forcing three-and-outs.

“Hopefully we can put together some long, sustained drives and get some points on the board,” Matthews said. “We want to throw the first punch, and finish the game this week.”

It will also be senior night in Plantersville for the Hornets.

The Ellwood Christian Eagles (0-7) return from their bye week to face the No. 9 Isabella Mustangs (7-1) in Maplesville on Friday night.

The Eagles will be led by interim head coach Gary Crum Sr., who is stepping in after former coach Mike Stokes coached his final game against Autaugaville.

Crum will coach the team for the remainder of the season, and begin looking for a new football coach during the offseason.

“I’m going to depend heavily on the experience of the assistant coaches that we have working with us,” Crum said. “I value their experience, and we’re going to put a plan together and play four full quarters.”

The Eagles haven’t had much luck scoring this season, apart from the game against Autaugaville where they put up 42 points in a loss. Facing a Mustangs team that allows less than 20 points per game to opposing offenses will be a challenge.

The Morgan Academy Senators (5-4) will travel to Prattville for their final regular season game against the Autauga Academy Generals (9-0) on Thursday night.

The Senators have already clinched their spot in the playoffs, but the unbeaten Generals will be a tough team to close the season out against.

Last season, Morgan lost 49-7 in the season finale against Autauga.

However, the Senators are in the midst of a two-game winning streak heading into this year’s matchup and look to keep the momentum going forward into the playoffs.

“We just came off an emotional victory against Pike Liberal and it was a very physical game,” Morgan head coach Josh Thacker said. “This Thursday, we’re playing the No. 1 team in the state in Autauga. They’re a very physical team.”

The Generals are a complete team in every facet of the game, according to Thacker.

They have a dual-threat quarterback and stiff defense as well.

On offense, they have scored an average of 40.7 points per game this season, while only allowing 17.6 per game to opponents.

“They’re well-coached and they haven’t lost a game in two years, so they’ve got a winning pedigree over there,” he said.

The Senators struggled in their final four games last season, but they have turned it around in 2017.

Thacker said that the team has been more efficient this season, and the boys have stepped up into their leadership positions.

“It doesn’t get any easier for us,” he said. “The grind doesn’t stop for us. It’s on our boys to take onus of what they want to do and how they want to prepare.”