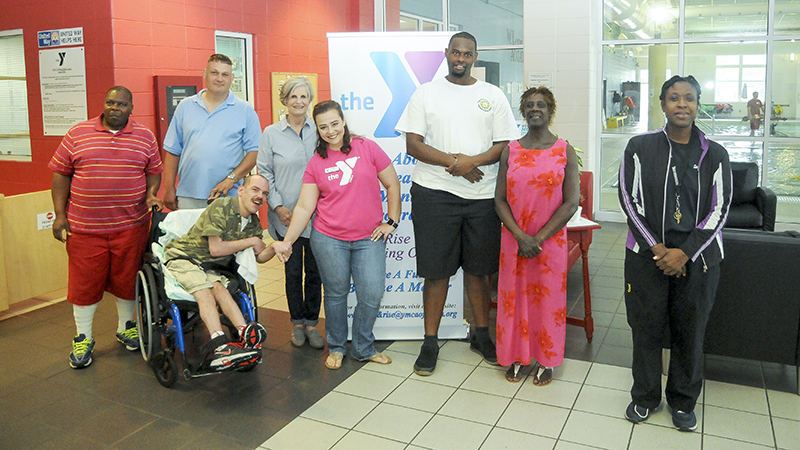 Over the years, patients from the Cahaba Mental Health Center like Henry Ward have become more than just visitors to the YMCA of Selma-Dallas County.

Ward has been coming to the YMCA for years and has blossomed from the isolated visitor in the lobby playing games on his cell phone to a beloved member of the YMCA family.

“Everybody knows who Henry is,” program and aquatics director Vanessa Felts said. “When he comes in, he’s greeted like he’s coming home to visit family.”

Ward has grown more comfortable coming to the YMCA over the years and showed an interest in getting involved despite his disability.

He was a volunteer during the 2015 YMCA summer camp, where he helped make Kool-aid and snacks for the campers. He worked part-time as a custodian with the YMCA, so he could spend more time at the facility.

The relationship between the YMCA and Cahaba Mental Health Center allows him and other patients to go to the YMCA twice a week. He says he enjoys everything about coming to the Y. His favorite things to do at the Y are swimming and working out. According to Ward, life would get pretty boring if it wasn’t for the YMCA.

“I’d probably be at the group home doing nothing,” he said. “We just have a basketball goal out there. It’s fun to come over [to the YMCA].”

On Tuesdays and Wednesdays, Cahaba Mental Health patients are picked up and brought to the YMCA to exercise and socialize with other members of the community.

Ward isn’t the only one who takes advantage of the weekly trips to the Y. Doris King, Stephanie Clark, Nettie Mitchell and Sammy Bearden love coming to the Y to swim. They enjoy practicing how to swim with their instructors and even engage in splash fights.

Bearden, who depends on a neck flotation device and the assistance of his instructor to keep his head above water, is the most vocal person in the pool. While getting his exercise he jokes around with his friends and socializes with other members of the Y.

Anywhere between 15-30 patients at the Health Center take advantage of the access to the Y, according to Cahaba Mental Health Center’s residential coordinator Lynn Sanders.

The YMCA of Selma Dallas County is able to provide this service to people with mental and developmental diseases thanks to donations to the annual campaign fund.

Not everyone at the mental health center is a member, but they rely on the services at the YMCA to provide an outlet for them to engage and interact outside of their typical routine.

The annual campaign fund helps services like these remain available in the Selma-Dallas County area.

“We have to have funds to be able to open our doors to people who can’t pay,” YMCA CEO Ann Murray said. “We provide [annual campaign] funds to fill in the gap of our services and our revenues. The annual campaign bridges those gaps, so that we can serve more people in our community.”

In order to contribute to the YMCA Annual campaign, interested donors can give online at ymcaofselma.org.