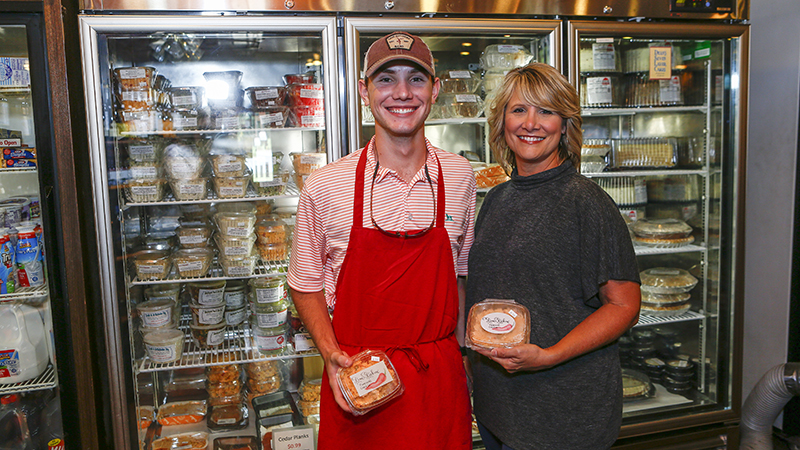 Kim Peake started making her pimento cheese about 10 years ago. It became a hit, and people started asking for orders from her kitchen. The dip is now available at Mark’s Mart in Selma. Peak is shown making the dip and with her son Phillip, who works at Mark’s Mart.

Kim Peake came up with her own recipe of pimento cheese about 10 years ago because she wasn’t a big fan of the “normal” dip. She began taking it to parties and gatherings and quickly developed a fan base for her dish.

“The pimento cheese was my go-to dish whenever we would have a function with friends or families whether it be a football party or a dove shoot, anything like that. I usually would make it like a dip and take it wherever,” Peake said. “We would go on a girls’ beach trip, and I would mix it up and take it down to the beach. Everywhere I would go, people would seem to like it so it was my go-to dish wherever I went.”

Peake would make the pimento cheese for friends when they asked, and, eventually, it grew and grew and became a lot to handle to make a batch and deliver it to her new customers. 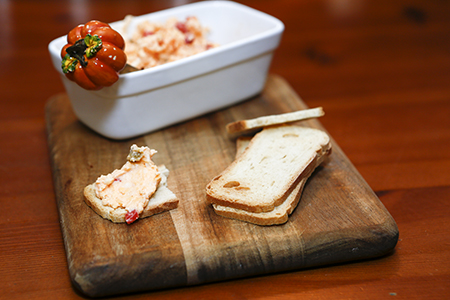 Kim Peak’s son Phillip said even after 10 years he still loves his mom’s pimento cheese dip, and his friends do too. The dip is available at Mark’s Mart.

Someone suggested that she put it in a store. Her son, Phillip, works at Mark’s Mart and had the owner to try it. He agreed to put the dip in the store, and that’s where she has been selling it for the last year. She said she ordered some containers, had a logo made and got busy making the pimento cheese to sell.

“About a year or so ago, we were at a function and people were asking me about the recipe and wanted the recipe and all, and someone suggested I put it in a store somewhere because people were ordering it all the time,” Kim said. “It got to where I could hardly keep up with it, so it was good to put it in Mark’s. They offered for me to put it in their store so that’s how it really started.”

Kim said that has really helped her keep up with the demand.

“I was just taking so many orders, and it just helped to have it in one place where people could go and buy it there and not have me running all over town delivering it,” she said.

Although Kim does all the work behind the scenes in Mark’s Mart’s kitchen, Phillip has an up-close view of how well the product sells, and he gets to hear what people have to say about it.

“It’s one of the hot things. Sometimes people come in looking just for that, so it’s kind of fun,” Phillip said. “It’s fun to see how quick it sells. I’m very biased to it. I tell people if they’re asking to ‘try this.’”

Even though he’s been around the recipe for a while now, Phillip said he still loves his mom’s pimento cheese and so do his friends.

“We had a bunch of friends come over for the Fourth of July, and I got hamburgers and I cut the meat and put it in the middle of the hamburgers and people loved that,” he said.

Kim said her kids’ friends always want them to bring over some of her pimento cheese.

“Everywhere we go, people will say bring some of your mom’s pimento cheese,” Kim said. “They all love it.”

Kim said people have told her that they like it for many different things, from a dip to putting it in and on other dishes.

“It’s kind of like your favorite salad dressing,” she said. “Some people have it just to put it on their mashed potatoes or on burgers and more.”

Kim’s pimento cheese is made a little different than what most people probably think of the dish. She uses cream cheese instead of mayonnaise and adds a little pepper for a slight kick.

“I don’t like traditional pimento cheese, so I just make up my own recipe,” Kim said.

“I don’t really care for mayonnaise and never really liked it as a kid, but I put it together and made it like a cheese ball and put a little jalapeno pepper in it to make it have a little spice to it and people seemed to really like it.”

When she was making it from her home for friends and her family, Kim was hand mixing the ingredients. But when things picked up and she had to start using a commercial kitchen at Mark’s Mart, that couldn’t cut it. 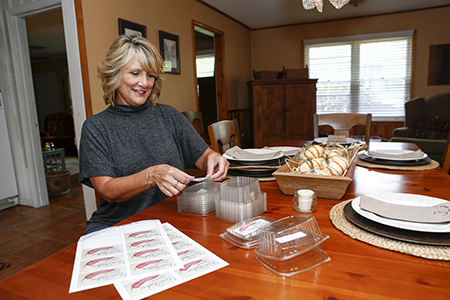 “I started mixing it by hand, but it started to get to be so much that I had to buy a mixer,” Kim said. “One batch probably takes 20 pounds of cheese.”

But even though she has had to start using a mixer to make it, she still hand scoops everything and does her best to make it look attractive and presentable in the case.

Kim fixes it and gets it ready for the store, then Phillip does the pricing and arranging.

“She makes it, and I do the rest,” he said. “I take care of the pricing and make sure it gets on the shelf and rotates and make sure the shelf life is what it’s supposed to be.”

But his favorite part is watching people come in and look for his mom’s own pimento cheese.