Bragging rights are up for grabs in local rivalry game 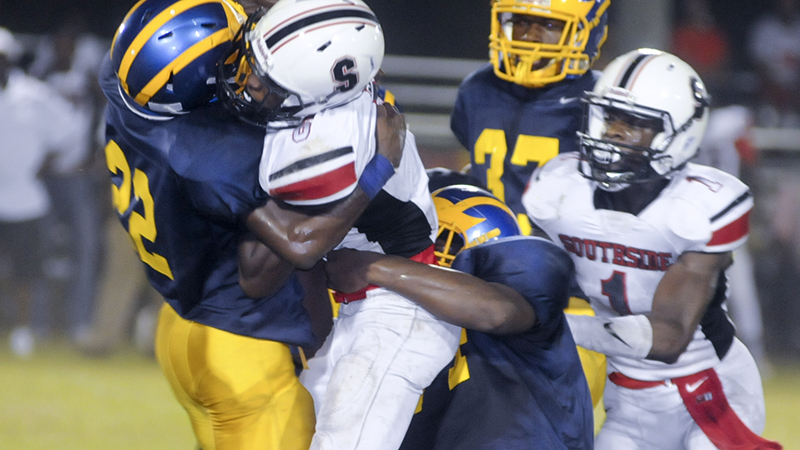 Southside has had a roller coaster of a season so far. The team won two straight after getting blown out by Selma High, but couldn’t keep the winning streak alive against Pike County.

Going into the halfway point in the season, the team is averaging just 17.8 points per game and allowing 29.8 to opponents.

The Panthers have been battling through some key injuries in the first couple weeks of the season, but head coach Daniel Flowers is hopeful that things will get a lot smoother when everyone is healthy.

When it comes to facing Keith, Flowers says there are no surprises. The Bears want to run the ball, and they want to do it a lot.

“’It’s nothing we haven’t seen yet,” Flowers said. “The last couple years we’ve done a pretty good job stopping their offense, so as long as we play aggressive and do what we got to do, we should be able to handle it.”

The Bears have had an equally up-and-down season through the first four weeks. The Bears have yet to be able to win back-to-back games and are looking to break that pattern against Southside.

“Three weeks ago, I felt like we should be hitting our stride about week four,” Keith head coach Harry Crum said. “We are just about where I think we should be, but we are not hitting on all cylinders, not quite. So, we realize we have some fine tuning to do.”

Keith’s offense scores up 29.8 points per game, and their defense only allows 23.3. Crum’s wing-T offense is dependent on ball security, and he says they have been doing a much better job with that.

The Bears will also have to be wary of Southside’s big play ability, according to the coach.

Explosive plays took the Bears out of a game they could have won against Aliceville two weeks ago. The Panthers have playmakers that are capable of big play threats.

When it comes down to it, this game is for cross-county bragging rights.

The two teams aren’t in the same region, so the game won’t hurt their region standings and playoff potential. But only one team will escape this game with their third win of the season.

“This game has a lot to do with local bragging rights,” Crum said. “You can really disregard all records, because these two teams don’t want to lose to each other.”

The Ellwood Christian Eagles (0-4) get a mid-season break from region games and will host A.L. Johnson High School Eagles (1-4) this Friday night.

The Eagles have been shutout two weeks in a row, but could have a chance to put up some points against an A.L. defense that is allowing 39.2 points per game.

Head coach Cliff Matthews and his Dallas County Hornets (1-3) football team earned their first win of the season last week against Sumter Central, but are heading into a very tough matchup against the Maplesville Red Devils (4-0) this Friday in Maplesville.

The Hornets had their highest scoring performance last week, but Matthews would like to see his passing attack improve heading into week five.

The Red Devils are the No.1 team in Class 1A and have outscored their opponents 219-43 this season.

The Meadowview Christian Trojans (0-5) will begin their final stretch of region games against the Tuscaloosa Christian Warriors (0-6) this Friday night. The Trojans are scoring 25.2 points per game, which gives them the edge over the Warriors who only score 13.7 per game.

The Selma High Saints (2-2) are traveling to York on Friday night to face the Sumter Central Jaguars (1-4).

The Saints are 3-0 against the Jaguars and defeated them 20-6 in 2016. The Saints offense should be looking forward to playing a Jaguars defense that allows 36.2 points per game.

Head coach Christopher Raymond is still having his team focus on getting the little things right.

The Saints have the ability to play good football, but they haven’t been able to put it together in consecutive weeks.

The Saints and the Jaguars have already faced a mutual opponent in Dallas County earlier this year.

The Saints won their game by 16, and the Jaguars lost to the Hornets by 14. Selma High is 2-0 in non-region games and will try to continue that streak against the Jaguars.

The Morgan Academy Senators (2-3) are on the road this Friday to play against the Clarke Prep Gators (1-4).

The Senators are looking to rebound after last week’s loss at home to the Glenwood School. The team enters the second half of the season averaging 30 points per game and allowing just 26.8.

Both the Senators and the Gators lost to Tuscaloosa Academy earlier this year, but Morgan’s margin of defeat was much smaller.

According to Morgan head coach Josh Thacker, this year could be a much different ball game since both teams switched from power to spread offenses. Although Thacker says his team typically matches up well against spread type teams, he also recognizes that Clarke Prep is always a tough defensive team.