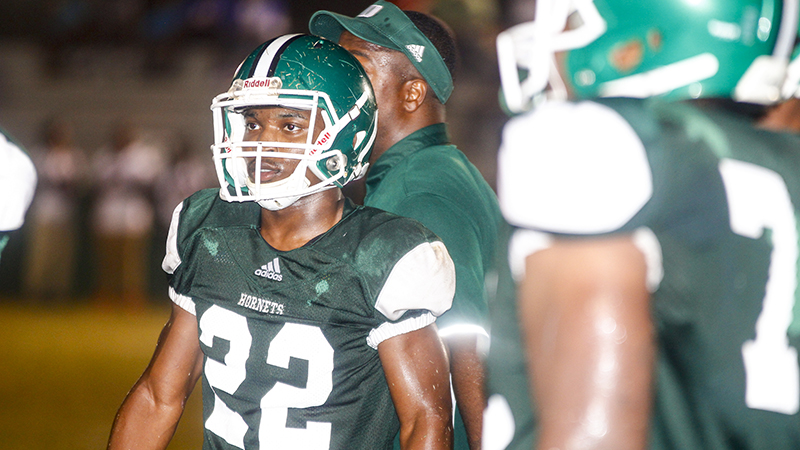 For a while though, it looked like the Jaguars might eke out the win on the road.

Sumter Central jumped out to an 18-6 lead in the second quarter before Dallas County started to battle back.

Jaguar quarterback Chris Millsap scored on a 3-yard keeper to give the visitors a two-score lead.

“We’ve been down in every game, but we never quit,” Matthews said. “Any adversity we go through, we are going to continue pushing, continue fighting.”

At that point, Calvin “CJ” Starks took control of the game. On the next play from scrimmage, he took the ball 64-yards to tighten the score to 18-12.

The team traded punts before Sumter Central threatened to score again. Running back Duane Ruffin got down to the one-yard line on a fourth and goal play before Starks ran him out of bounds and prevented another score.

The Hornets would use a little trickery after the break, scoring on a 22-yard touchdown pass from Starks to Josiah Barnett. The strike tied the game at 18-18 with 1:46 left in the third.

Quainas Coleman recovered a blocked Jaguar punt in the endzone to put the Hornets up 24-18. Starks would also add another score via a 10-yard run to extend the lead to 30-18. Starks converted the 2-point play too to cap scoring for the night at 32-18.

Matthews said the team need to work on little things this week before going out of region to take on Highway 22 rival and 1A powerhouse Maplesville next week.

“It’s the details. Just pay attention to little things and do what we do,” Matthews said.