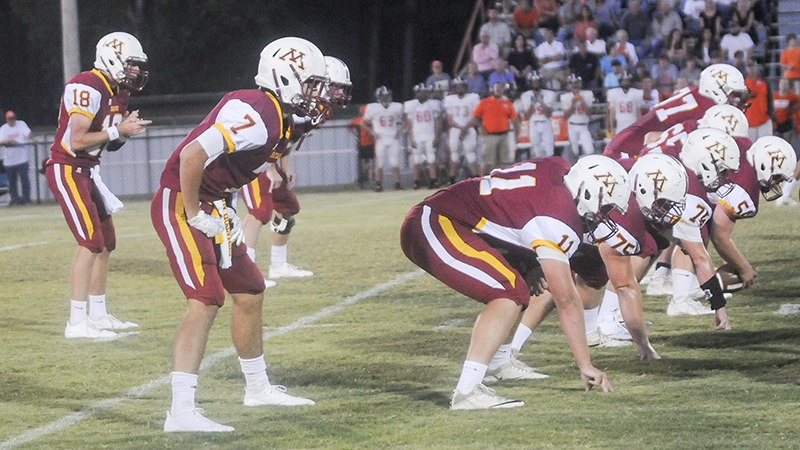 Morgan Academy Senators prepares for the snap. The Senators are 2-2 heading into this weeks game against Glenwood School.

The Morgan Academy Senators (2-2) get a break from region play, but will still have a difficult opponent to face on Friday in the Glenwood School Gators (2-3).

“Glenwood is a talented football team, and they pose a lot of different threats,” Senators head coach Josh Thacker said.

The Senators are coming off a much-needed win against Hooper Academy that broke a two-game losing streak.

Thacker and his coaching staff want their players to look forward to this game as if it were a ‘new season’.

After a roller coaster start to the season, Thacker is trying to get his team re-booted before they reach the half way point of the season.

“I’m kind of interested to see how our guys respond to that,” he said.

Thacker is pleased with his team’s preparation going into the week.

According to Thacker, the offense has settled in and the defense is prepared for the Gators offense.

The Senators defeated the Gators 34-6 in 2016, but Thacker doesn’t expect them to play as cautiously this year.

“[Glenwood] is hungry on defense,” he said. “They’re really getting after it… Offensively they’re very dynamic. They throw the football all-around, and they have weapons everywhere.”

Even though it isn’t a region game, the game against the Gators will provide a good test for a Senators team trying to stay on the winning path.