Selma gets best of Dallas County in rivalry game 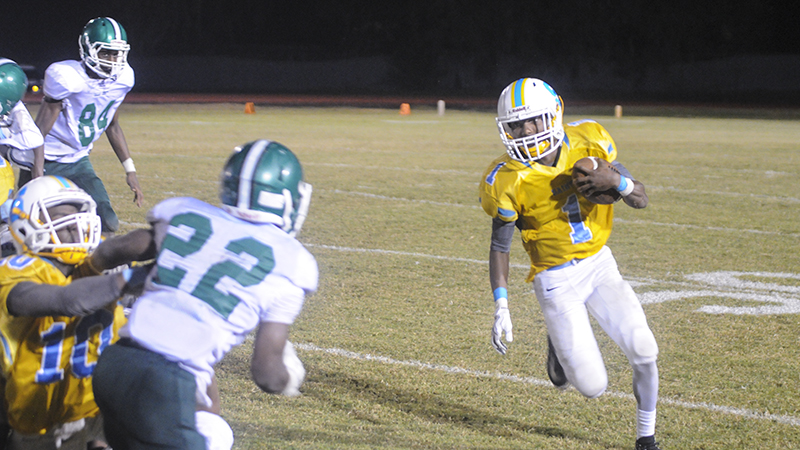 The first quarter was a defensive battle for both teams. On the first two possessions of the game, the Saints and the Hornets made goal line stands on fourth down to prevent each other from scoring first.

They continued to trade possessions until Dallas County quarterback Octavious Palmer fumbled the snap on his own 1 yard line.

The Saints were able to take advantage of the costly error and running back Amarian Molette scored the first touchdown of the game on a short run to make the score 6-0.

“The running game was great today,” Molette said. “The linemen blocked for me and executed on all the big plays that we had.”

After that first score, the Saints started marching more efficiently against the Hornets.

Quarterback Tyreshon Freeman scored another touchdown on a five-yard run with 1:45 left in the first half.

Molette ran in the two-point conversion to make the score 14-0 going into half time.

Saints head coach Christopher Raymond mixed in some wild cat formations that gave Molette opportunities to take the snap directly, and it paid off.

“When we want short yardage, we know we can pound people so we decided that was going to be good for us tonight,” he said.

Selma’s strength is their balanced attack.

In the second half, Gabriel Wade made touchdown catches in both the third and fourth quarters.

“[Gabriel] has been performing for us all year,” Raymond said. “When you’ve got good players, you try and give them an opportunity to touch the football.”

The Hornets were glad to have quarterback Octavious Palmer back in the starting lineup after being out last week with a concussion.

Unfortunately, it didn’t solve the Hornets issues on offense.

Dallas County fumbled the ball four times, two of which were recovered by Selma, and threw an interception in the game. The errors, both forced and unforced, prevented the Hornets from continue promising drives.

“I think we played well in spots,” Dallas County head coach Cliff Matthews said. “We didn’t do enough to finish the game and some things didn’t go our way. I’m pleased with the way my guys played, but we just need to find a way to get over that hump.”

The Hornets also offense remained a predictably one-dimensional rushing attack. Running back Calvin Starks accounted for all of Dallas County’s points with a rushing touchdown and a punt return touchdown.

The Saints will have their third home game in a row next Friday, Sept. 22 against Paul Bryant High School at Memorial Stadium.

Dallas County will host Sumter Central next Friday in Plantersville.