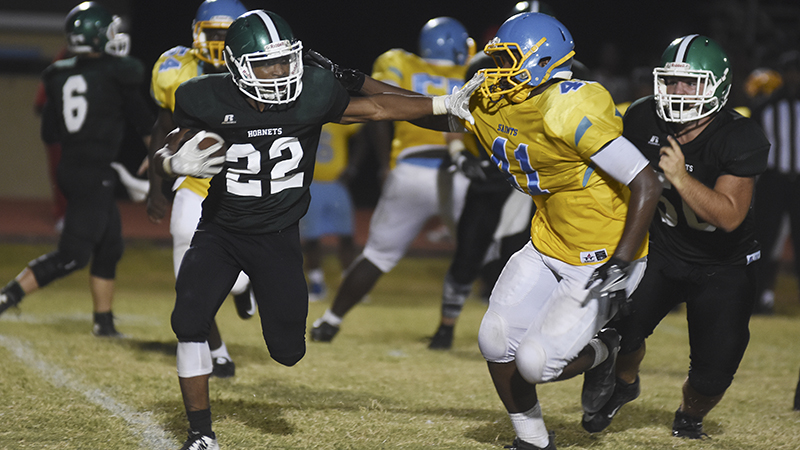 The Dallas County Hornets (0-2) will come to Memorial Stadium this Friday to face the Selma High Saints (1-1) for the Game of the Week.

This matchup isn’t a region game, but the local area schools are both in need of a bounce back game.

The Saints are coming off a 54-28 region game loss to Bessemer City.

A complete turnaround from the performance they put on in their season opener.

“I didn’t like our aggressiveness and our tackling,” Selma head coach Christopher Raymond said. “I think we need to clean up our tackling and execution on offense. As a team, we need to be more aggressive.”

Improving on tackling will be of utmost importance against Dallas County because of how much the Hornets run the ball, according to Raymond.

“Dallas County likes to run the football and they run it well,” he said. “They got a pretty good group of running backs up there and we have to be able to tackle those guys.”

The Saints will continue to use their balanced offense to attack the Hornets on the ground and through the air.

Raymond likes to use both Rondarius Sanders and Tyreshon Freeman at quarterback, since they provide dual threat options on each play.

Amarian Molette is a strong runner that usually takes on multiple defenders before he goes to the ground.

“Right now, we’re averaging 40 point a ball game,” Raymond said. “We do want to execute better on offense. Our main focus is executing and following the game plan better.”

On the other side, Dallas County is still trying to get their first win of the season.

Even though the Hornets defeated the Saints 34-18 in 2016, this year will be more challenging.

Head coach Cliff Matthews is hoping to have his primary quarterback Octavious Palmer back from injury this week. Palmer was held out of last week’s 53-7 loss to Calera due to a mild concussion he sustained during the season opener.

According to Matthews, Palmer did participate in drills during practice and is still a game-time decision.

If Palmer can’t go, Hunter Skinner will be at quarterback again this week.

Matthews, who was the defensive coordinator for Selma High last season, said his team is going back to the basics in preparation for Selma.

“We’ve faced teams like Selma the last two weeks,” he said. “Teams that try to spread it out, run the read-pass options and inside zone plays. We’ve pretty much practiced for them in the last two games.”

Matthews does have a slight edge in preparing for a defense that hasn’t changed much since he was the defensive coordinator.

“Being that I know the scheme and the personnel, hopefully I can be a step ahead of it,” Matthews said. “We need to set the tone from the beginning of the game. It’s going to be a very intense game.”