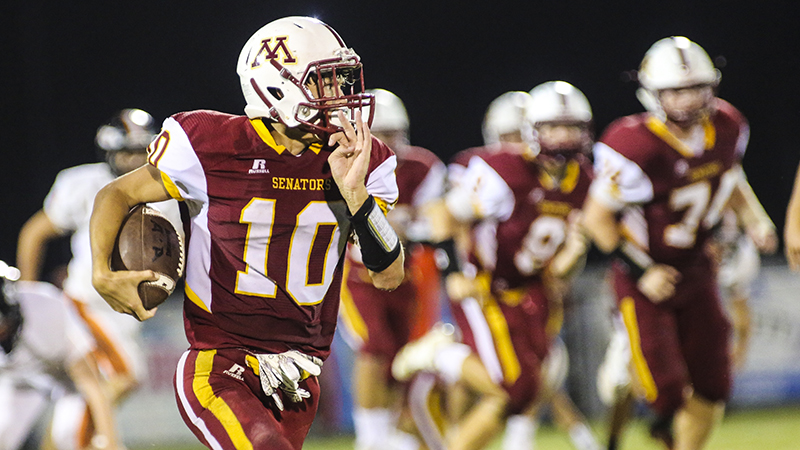 Hardin Utsey carries the ball for Morgan during the Senators loss Friday against Monroe Academy. (Photo by Doug Horton)

It was a long Friday night for the Morgan Academy Senators who lost 56-20 at home to the Monroe Academy Volunteers.

“We just blew assignments, reads, throws and blocks,” Senators head coach Josh Thacker said. “Just a little bit of everything, things you can’t do against a good football team.”

The Senators received the ball to start the game, but they were up against a tough Volunteers defense.

Thacker decided to play aggressively out of the gate and attempted a pass play on fourth and six. Unfortunately, quarterback Peyton Egbert was intercepted on the play by Dalton McKenzie, who returned it to his opponents 20-yard line.

The gamble backfired, and the Volunteers scored two plays later on an 11-yard run by Max Carter.

Morgan Academy was at least able to get a first down on their next drive but were still unable to answer and forced to punt.

The Volunteers struck again immediately with an 81-yard touchdown run by quarterback Griffin McKenzie. The team missed their first two PAT’s, so the score was just 12-0 with 7:48 left in the first quarter.

“We felt like our biggest advantage was our speed,” Monroe Academy head coach Mitchell Turberville said. “We clicked pretty good tonight on offense … Morgan played hard, but we probably just had too much speed for them at the end of the day.”

The Senators tried to feed lead running back Sam Brackin early in the game, but there was just no room to run. He was held to 55 yards rushing by the Volunteers defense.

After another three-and-out, the Volunteers started another scoring drive capped off by McKenzie’s second rushing touchdown of the game. This time the Volunteers passed the ball into the end zone for a successful two-point conversion and take a 20-0 lead.

The Senators next drive was more successful after Hardin Utsey busted open a 49-yard run down to the opponents 3-yard line. It took Egbert two tries, but the quarterback sneak to the left side of the line finally got the Senators on the board. A successful PAT made the score 20-7 with just under three minutes left in the first quarter.

However, the momentum was still on the Volunteers’ side. The offense was too explosive and constantly broke the Senators containment. In the final three minutes of the first quarter, they marched all the way down to Morgan’s 3-yard line. The Volunteers scored on a run by Dalton McKenzie to open the second quarter. The two-point conversion made the score 28-7.

The Volunteers scored two more times in the second quarter and didn’t allow the Senators into the end zone for the remainder of the half.

At halftime, Monroe Academy was leading 35-7.

The Volunteers kept their foot on the gas to open the third quarter and Dalton returned the kick-off for a touchdown. They made the PAT to make the score 42-7.

The Senators showed some life on offense during the next drive. The team made it all the way to the red zone, but the Volunteers were able to make a third down stop on the 17-yard line.

Thacker was able to cash in on his second gamble of the night on fourth and 15 when Egbert found Brackin in the end zone for his first passing touchdown of the game. The score was 42-14 after the PAT was made.

“The guys are fighters, and they’re always going to be,” Thacker said. “That’s the Morgan spirit, so I was glad to see them not hang their head and keep fighting.”

Thacker tried something new this game by using a dual-quarterback system. While Egbert was still the main quarterback, Ed Williams also got some plays to take snaps. Egbert ended the night with both a passing and a rushing touchdown with only one interception. Williams rushed for 42 yards on 11 carries.

“That was something we put in this week, and it worked out for us tonight a little bit,” Thacker said.

The Senators defense stepped up on the next possession when Utsey intercepted Griffin’s pass on the 3-yard line. Unfortunately, Morgan Academy was unable to capitalize on the turnover.

Griffin ended up throwing a touchdown to Dalton on the next drive to extend the lead to 49-14 after the extra point.

With 10:28 left in the fourth quarter, Thacker put in his second-team offense to finish out the game. The Volunteers scored one more time on a short pass from Colby Higdon to Bryce Black that turned into a 54-yard touchdown play. The PAT failed and the score was 56-20.

Utsey capped off his individual performance with a kick return touchdown for the final touchdown of the game. He ended the night with 52 rushing yards on three attempts as well.

Thacker said his team is going back to the drawing board on Monday, according to Thacker. Next Friday, the Senators will play at home against Hooper at 7 p.m.