Bessemer City pulls ahead in second half against Selma 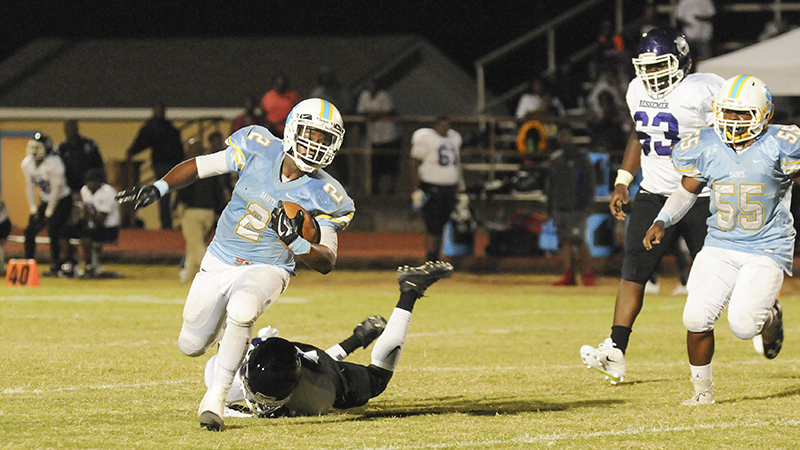 Selma (1-1) had Bessemer City (2-1) right where they wanted them Friday night, but four second half touchdowns were too much to overcome in the Saints’ 54-28 loss at Memorial Stadium.

Key turnovers in the first half and missed tackles all game hurt the Saints and cost them the game.

The Saints defense came up big on Bessemer’s opening drive. After driving the ball into the redzone, Bessemer’s Roterius Torrence dropped what looked like a sure touchdown pass.

The Saints couldn’t get anything going on their first drive and punted the ball away. A short punt gave the Purple Tigers the ball on Selma’s 34-yard line. A few plays later Jason Foster punched it in from the 1-yard line to give Bessemer a 7-0 lead midway through the first quarter.

Selma answered right back with a touchdown of their own. Tyreshon Freeman found a wide-open Gabriel Wade streaking down the middle of the field for a 66-yard score. That tied things up at seven apiece.

Late in the first quarter Bessemer punted the ball away, but Selma muffed the punt and gave the ball right back on their own 17-yard line.

Selma fumbled again on their next possession, giving Bessemer good field position again. Johnson-Mason scored again, this time from 10 yards out to put Bessemer up 20-7.

“It was big because at that time I think we had the momentum,” Raymond said. “You can’t do that with a good team. We were making a lot of rookie mistakes, but hopefully we’ll get it better.”

The Saints fired back again. Freeman threw a short pass to Rondarius Sanders, who took it to the house for a 48-yard touchdown. That cut the Bessemer lead to 20-14.

Selma’s defense came up big on Bessemer’s next drive, causing a fumble and recovering it near midfield, but the offense couldn’t come up with anything.

Selma took the lead late in the second quarter on a 13-yard touchdown run from Amarian Molette, making it 21-20.

The final play of the first half came with 4.8 seconds left on the clock. Jadarien Solid caught a 22-yard touchdown pass from Foster, taking the lead and momentum back. That score put Bessemer up 27-21.

“Once we found our identity, we were able to pull the game together,” said Bessemer head coach Quintin Jackson.

The Saints got the ball back to start the second half, but they couldn’t get anything going on offense. Bessemer’s second drive of the third quarter put the Tigers back on top after a 2-yard touchdown run from running back Joshua Miller. His first of three scores on the night gave Bessemer a 34-21 lead.

Miller’s second score came early in the fourth quarter. He ran the ball in from the nine-yard line to put the Tigers up 40-21, but Selma wouldn’t go away.

Sanders caught the kickoff on the 15-yard line and took it to the house, breathing some life back into the Saints.

Miller’s third score of the night took any chance of a Selma comeback away. Midway through the fourth quarter, he scored again from 22 yards out, giving the Tigers a 46-28 lead.

“He’s an explosive back,” Jackson said. “He showed up for us tonight, and he did his job.”

Bessemer’s final touchdown of the night came on a 36-yard quarterback keeper from Rishard Densmore, giving them a 54-28 lead.

“I think we’ve got to work on our attitude. We’re still trying to change the culture and remind the kids that no matter what goes on in the game, you have to finish,” Raymond said.