Water at trailer park still off 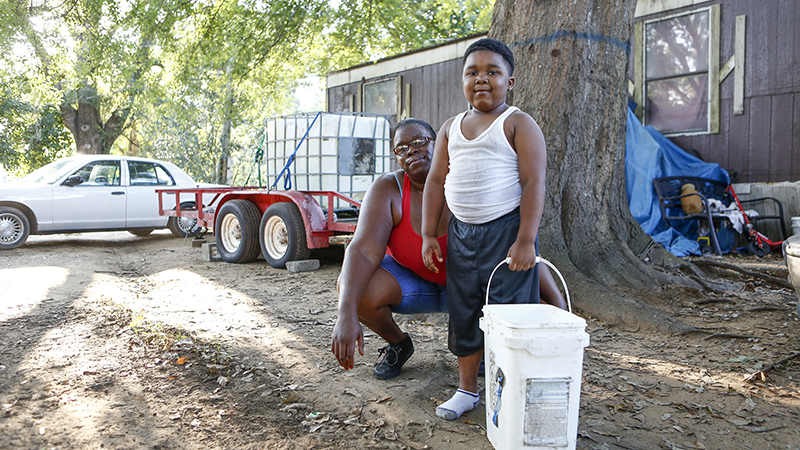 Emily Jackson and her 5-year-old son Jamie remain without running water at Cahaba Park West. Water to the trailer park was cut off last week after property managers stopped paying the bill.

A temporary restraining order has been issued against the owner of Cahaba Park West trailer park after residents have been without running water for more than a week.

Elizabeth Hollie, an attorney with Legal Services Alabama’s Selma office, said she filed an emergency petition for a temporary restraining order Monday, and it was signed by Judge Marvin Wiggins Wednesday.

“We were contacted by a client before the water was actually turned off, so when the water got turned off, we filed something against the owners and the management company,” Hollie said.

Water service was cut off Monday, Aug. 21 due to the owners, IC Sunshine LLC and Wai Ning Fong, not paying the bill. The Selma Water and Sewer Board has not released the amount owed, but in a motion filed in Dallas County Circuit Court, the bill is described as “an extremely large amount.”

“We’ve come up with a temporary solution for now, but we are working to find something more permanent, and this is a work in progress,” Hollie said.

According to the order, Selma Water and Sewer Works has agreed to install a new water meter and one of the residents has agreed to set up service for the meter.

“We have worked it out temporarily that there will be one faucet for the entire trailer park at the moment for the residents to fill whatever container they can with water at the moment,” Hollie said. “Right now, that is our best option temporarily.”

Residents have been paying their rent each month by depositing a check into an account at Regions Banks. According to the order, the “account should be frozen, and no deposits made into or withdrawals taken.”

The order says residents have agreed to deposit their rent payments through the circuit clerk’s office, and those payments will be used to pay the bill for the water from the new meter, which will be installed on the “right-of-way adjacent to Cahaba Park West.”

“We’ve come up with a temporary solution for now, but we are working to find something more permanent, and this is a work in progress,” Hollie said.

While residents still don’t have running water, there is a much closer water source. The Times-Journal spoke to residents last week that were hauling a bulk water tank to Beloit to fill up and bringing it back to the trailer park.

“This day and time, this should not be an issue,” Hollie said.

Robert Allen, chairman of the water board, said they had no choice but to shut the water off because of a bond covenant.

“We are under a bond covenant not to give free water, and we have to stay within that covenant because we have to answer to the bond trustees and also the bond holders, the investors,” he said last week.

“We’re only allotted a certain amount of time until we have no other choice but to discontinue service.”

Hollie said Legal Services Alabama is hoping to get permanent running water restored back to each trailer.

“Right now, they’re going to have to share, and it’s not fair considering they did what they were supposed to in paying their rent, which was supposed to include water,” she said. “We would like long-term for each individual trailer to have running water.”

A hearing has been scheduled for Sept. 8 at 1 p.m. at the Dallas County Courthouse.