Morgan Academy opens season in style with win over Marengo 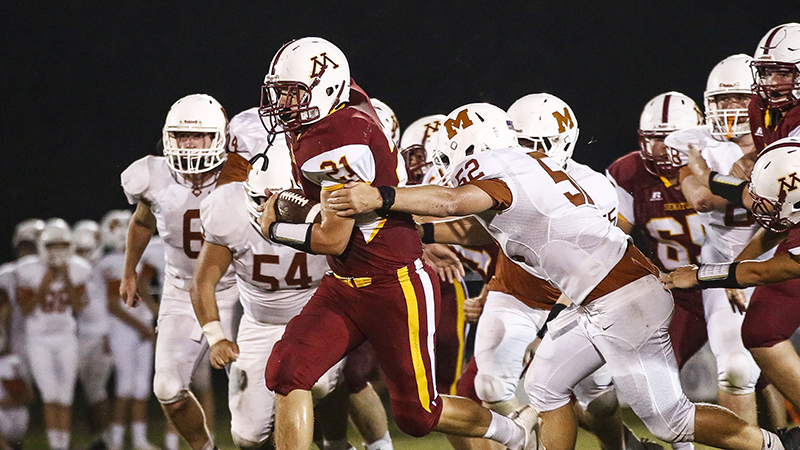 Will Ingram scores on a 20-yard touchdown run against Marengo Academy on Friday night. The Senators opened their 2017 campaign with a 57-6 win in front of the home crowd.

An explosive offense and a stingy defense led Morgan Academy to a 57-6 victory in the season opener Friday night against Marengo Academy.

Head coach Josh Thacker said key fumble recoveries by the defense and big plays from the offense were the keys for his team.

“We just caught some breaks tonight. [Sam] Brackin got loose a few times, and we had some things we didn’t expect like a special team’s touchdown, but overall I was proud of our guys,” Thacker said.

The Senators went three and out on the first drive and threw an interception on the second drive, but a fumble recovery by linebacker Mason Perkins got the momentum going.

A few seconds later, Peyton Egbert connected with a wide-open Britton Adams, who scampered down the field for a 76-yard touchdown.

The defense came up big again when the Longhorns fumbled the snap on a punt in the end zone on fourth and long. Morgan’s Kevin Zhang jumped on the ball, giving the Senators a 14-0 lead with 1:50 to go in the first quarter.

Marengo Academy answered back with a long drive and a short touchdown run from William Drake, the Longhorn’s only points on the night.

“We were right there in it the first quarter … we just had a few key fumbles, and the momentum went their way, and once it went their way it never came back to us,” said Marengo head coach Lebo Jones. “We’ve got a young team and not any depth hardly, and it showed. We’re just worn out.”

The points kept pouring on for Morgan Academy. On the ensuing kickoff, Ed Williams took it to the house from nearly 70 yards out, giving the Senators a 21-6 lead early in the second quarter.

On the Senators’ next possession, senior running back Sam Brackin broke free from the defense and scored on a 67-yard run, putting Morgan up 28-6.

“I thought we executed well,” Thacker said. “We did a great job identifying what they were trying to do to us defensively, and we were able to exploit some areas they had.”

Another mistake from the Longhorns put Morgan back in scoring position. Defensive back Taylor Jones recovered a fumble, making it the second of the night for the Senators defense.

“The defense played great all night. Coach [Shaun] Bonds, as always, has a phenomenal game plan set up, and he works his rear end off,” Thacker said. “Defense is his baby, and he’s done a great job with it.”

Brackin scored his second touchdown of the night from 36 yards out. He got into the end zone untouched by the Marengo Academy defense and built the Morgan lead up to 35-6.

With less than 20 seconds on the clock, Morgan scored again. Egbert tossed a 60-yard touchdown pass, putting Morgan up 42-6 at halftime.

The Senators defense held Marengo in check for the rest of the night, and the offense kept on rolling.

A fumble recovery on the nine-yard line put the offense in prime position. Brackin scored his third and final touchdown of the night on a 9-yard run. That put the Senators on top 49-6 with 7:05 left in the third quarter.

Will Ingram scored the final touchdown of the night for the Senators on a 20-yard run. There was a mishap on the snap on the extra point, but Egbert was able to scramble into the end zone for the two-point conversion, making it 57-6.

Morgan Academy will go on the road next week to play Tuscaloosa Academy.