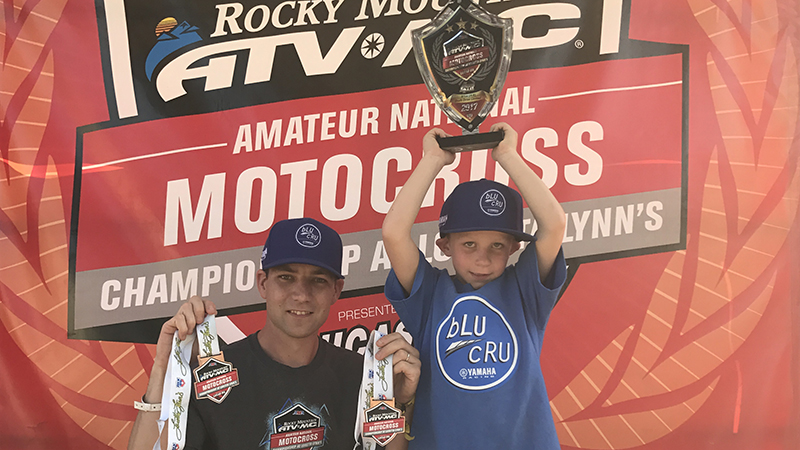 Each year, motocross riders from across the country race year-round for a chance to compete in the Amateur National Motocross Championships at Loretta Lynn Ranch in Hurricane Mills, Tennessee.

Valley Grande native Collon Holbrook, 6, made his second consecutive trip to the big race earlier this month, and finished in fourth place overall in the 51 cc (4-6) Shaft Drive Limited class.

There were 34 other riders competing in Holbrook’s class that came from states as far as California, Wisconsin and Maine.

“I had a good time there,” Holbrook said. “I played with my friends and raced a lot.”

On Aug. 1., Holbrook’s class ran three races, or Motos, that were five laps each. The rider’s lap times and average finish during the three races determines their placement.

In his class, all the bikes are stock bikes so the race comes down to who the best riders are.

“The only thing we’re allowed to do is rejet the carburetors, change the rear-end gear, change the tires, foot pegs and handle bars,” his dad Chad Holbrook said. “Limited means it’s a stock class. You cannot modify. You can’t do engine work.”

In the first Moto, Holbrook was in fourth after the first lap. He slipped to fifth during the second lap, but was able to improve his lap times in each of the last three laps to get back into fourth place.

In his final lap, he finished in 3:37, which was his best lap time in that Moto.

One of Holbrook’s best skills as a racer is his ability to adapt and make adjustments.

“If we tell him to change something on a weekend or even at Loretta’s, you’re going to see him make that change,” his mother Amanda Holbrook said. “He completely gets the whole aspect of racing, and where to make those changes.”

In Moto 2, Holbrook was in third place after the first lap. He dropped one spot in laps two and three but regained his position for the final two laps. He finished in third place overall in the second race of the day.

Holbrook saved his best effort for his final race. He finished his first lap five seconds behind the leader. In the second lap, he dropped to fourth, but made up ground to finish the third lap in second place.

Holbrook went back down to third place for the final two laps and finished 37 seconds behind the leader.

He missed second place by 1.209 seconds.

“His maturity level was much greater this year, so he was much more confident in his starts,” Chad said. “We never had to work through traffic, and he was always a front-runner from the time the gate dropped until the flag flew.”

Holbrook earned two bronze medals for each of his third-place finishes and an award for his fourth-place overall finish. Amanda said she teared up watching her son receive his awards on the podium.

“It felt good coming in fourth place,” he said. “I haven’t finished that high at Loretta’s before.”

Even though he was one of the top racers, Collon felt that he still could’ve done better. After the race, he and his dad went over a few opportunities where he had chances to pass other riders.

Had he not fallen in his last Moto, Collon believes he may have had a higher finish.

“I wish I would’ve got second,” Collon said.

The whole family always travels to watch Collon compete in races year-round. His sister, Callen Holbrook, 5, and brother Cohen Holbrook, 1, were there to support their older brother.

Callen even made a custom sign to help cheer on her older brother.

Those strong finishes allowed him to advance to the regionals.

There are three regional races, and only the best get invited to compete at the National Championship.

At his first opportunity in Kemp, Texas, Collon finished in first place and secured his spot at Loretta Lynn.

Only three other boys from that regional received invites to Loretta Lynn, according to Amanda.

Preparing for this race was a year-round process for the Holbrook family.

“We’ve got four kids, and it’s a family event,” Chad said. “Collon doesn’t like it when we leave some one behind.”

Collon races in both arena and outdoor circuits. It can be costly to make every single race.

“The good thing is that he is a sponsored rider, so we do have a small break in costs,” Amanda said. “The average is about $80 a race. Our biggest expenditure is in gas.”

Thanks to help from sponsors and supportive family members, Collon is able to participate in races throughout the year.

“I’d like to thank Troy Miller at Crossbone MX Ranch, Lee Nichols, Pro Flo racing, Smith Goggles, 396 Graphics and the family and friends that support us,” Amanda and Chad said. “I’d like to give thanks Derek Lowery and Michael Mims for giving us the confidence that we can do it.”