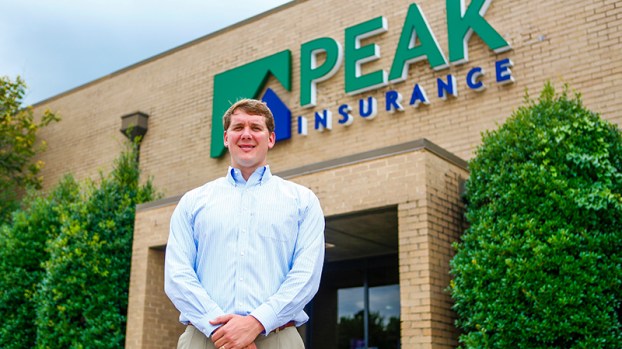 Owen Peak always knew he wanted to move back home to Selma, but he never knew the impact he could have here.

20 Under 40: Peak follows in dad’s footsteps in insurance business

Owen Peak always knew he wanted to move back home to Selma, but he never knew the impact he could have here.

“The Lord brought me back here. Selma has a draw, despite its negative publicity,” Peak said. “Selma has a lot to offer. The Lord is doing a lot here, and I think that is pretty evident by all the young people who moved back and who want to move back.”

Peak, 32, said he wanted to pursue a career in real estate, but God had other plans for him.

“All the doors kept closing for real estate and opening for insurance,” Peak said. “At some point, you have to see the writing on the wall, and say, ‘I think this is what the Lord has for me.’”

“Dad was no pressure just like it’s a great opportunity to move back and to be around people,” Peak said. “You get really close and become lifelong friends (with your customers), and even though you have to be behind a desk, it allows you the freedom to work your own schedule.”

Though he appreciates all of these benefits, he said he chose insurance because it’s about helping people.

Peak is involved in working to better the community he and his family call home.

He is a member of the Economic Development Authority board as well as the board for Arsenal Place Business Accelerator.

“You have to have small business, and we need more of those. We don’t need them closing; we need them opening,” Peak said. “That’s why Arsenal Place is there to generate more jobs in the small business sector. We try to incubate small businesses in Selma or somebody that wants to start a business and give them a sound board of different business people who can help.”

He also uses his passion for helping others to work with the youth in Selma. He and his wife are Sunday school teachers at Blue Jean Church, but he most loves being a role model to kids who may not have one.

“The kids, who don’t have two parents and grew up with in a home where isn’t normal to have a father figure. Helping those kids see that there is an alternative to just being turned out on the streets, and giving them a male role model to look up to.”

He met his wife Ashley at Auburn University, and both of them believed that Selma was where they were meant to be. They have two sons, ages two and four, named Crawford and Jack.

“We definitely both were called to be back here,” he said.

Community comes out to greet All Stars at Bloch Park

The 15U Selma all stars received a hero’s welcome as they returned home to Bloch Park on Monday escorted by... read more