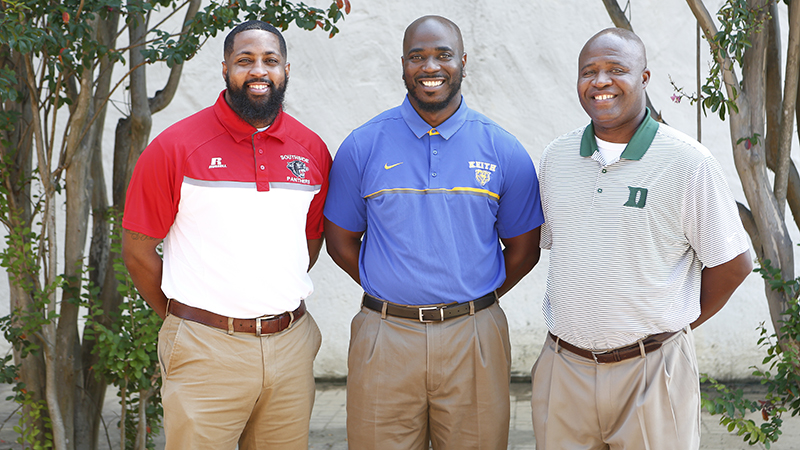 Cedric Brown, Tommy Tisdale and Willie Moore pose for a photo Saturday. The three former basketball coaches have recently been named as principals in the Dallas County School System.

Three Dallas County basketball coaches that had their fair share of success are stepping away from the court and into the principal’s office.

Cedric Brown, Willie Moore and Tommy Tisdale, who are no strangers to each other, have been hired as principals in the Dallas County School System – Brown at Southside, Moore at Dallas County and Tisdale at Keith.

“I think the competitive nature in all three of us will still be there; however, it’s not about a win and a loss now,” Tisdale said. “We’re competing in the same battle, so we’re basically all three on the same team.”

“The very successful coaches which we all were, we were really good teachers as well. Now we’re just turning that into an administrative duty,” Moore said.

Brown, a 2003 Southside High School graduate, said it is a dream of his to be principal of the very school he graduated from.

“It goes back to our managing skills when we managed players,” Brown said. “Now, we’re pretty much managing teachers on a higher level and in an academic role.”

Moore believes their coaching experience and success will help them gain academic success.

“I know how hard they work. As a coach, I can speak of that because I planned against those guys, so I know that they’re going to be very successful where they are,” Moore said.

Hattie Shelton, Dallas County Schools superintendent, said the decision to hire Brown, Moore and Tisdale was made last month, and it is a decision she thinks will benefit the school system.

“They have a dedication to children, and that was what was important to me, their interest in our children succeeding and helping to move the system forward,” she said.

In the past the three couldn’t call each other the night before a big game to talk about a plan, but now, they can.

“We love our kids, and because we had that prior relationship and have been in those buildings before, it allows us to transform that into some community activities and being able to understand the parents and the way that our community thinks.”

While being principal is a little bit different than head basketball coach, all three are excited for the school year and the challenges that lie ahead.

“I’m excited just to take on this new part of my life, but at the same time we are coaches. You can’t camouflage that,” Tisdale said. “Obviously, the program management was pretty good, so I’m taking that same approach to the academic side.”