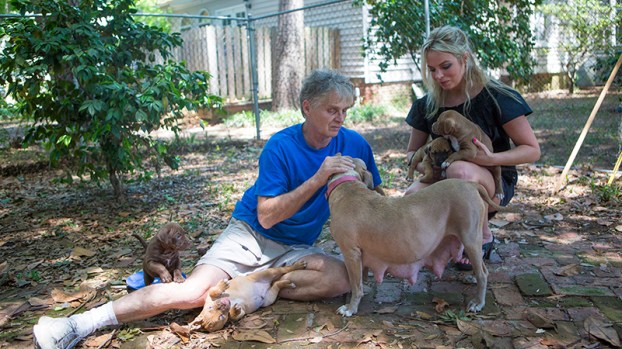 Robert and Catherine Ann Gordon pet Momma Dog and four of her eight puppies. They said someone stole four of the puppies Tuesday afternoon from their home on Union Street. --Alaina Denean Deshazo

Robert and Catherine Ann Gordon said someone stole four mix-breed bulldogs from them Tuesday on Union Street. Catherine said the 5-week-old puppies were inside of a tall fence, along with their mother and four other puppies, and that someone stole them while she and Robert were gone between 1 p.m. and 6:30 p.m.

“I got home from teaching and came out to feed the puppies, and when I come out to feed them they all come running, and only four came running and my heart just sunk because I knew immediately that they had been stolen,” Catherine said.

Selma Police Department Chief Spencer Collier said a police report had been filed and the department is actively investigating the case.

Collier pulled reports from 2015 and 2016 and said that Selma had 29 reports of stolen dogs over that period of time, a number he believes is high for a city of Selma’s size.

“To me that’s a high number,” Collier said. “I think it’s unusually high for a city of this size.”

Collier said all of the charges are for third and fourth degree theft, but he wasn’t immediately sure how many people have been arrested or convicted of the thefts.

According to Pet FBI, an estimated two million pets are stolen each year, with most being thought to have been stolen because of the purebred status, in hopes of a reward, puppy mills, dog fighting rings and disgruntled neighbors or family members.

Catherine and Robert believe the puppies are some type of pit-bull and bull dog mix, but cannot be certain of the breed because the mother was also a rescue.

Although they don’t record the breed of dog stolen for the reports, Collier did believe that pit bulls are one of the more common stolen breeds.

“It’s been my experience in the past, that’s it’s generally going to be a dog of a fighting breed,” Collier said of the majority of the stolen dogs.

Catherine said they found the mother dog, named Mommy or Momma Dog, in early March, and she had the puppies April 4.

“She had eight puppies and we have been taking care of them expecting to let Wannabe Rescued and Wolf Pond [Sanctuary], … take the puppies,” Catherine said.

Robert said they are heartbroken over the puppies, and they are offering a $300 reward for the safe return of the four male puppies, Barkley, Tippy, Tiny and Star.

“They’re such good little dogs. We just want our puppies back,’ Robert said. “They want to come home.”

A 30-year-old Selma woman and her three-year-old daughter have been reported missing after traveling to Tulsa, Oklahoma last week to... read more