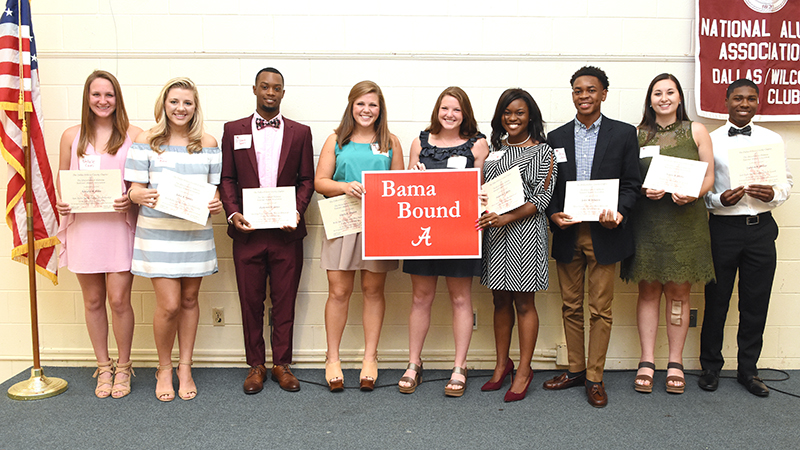 He told each of the 12 scholarship recipients to start their own list of people that had helped them get to that moment in their lives, on the verge of starting their college career.

“Your list will never be complete because there’s somebody somewhere sometime who put in a good word for you that you didn’t even know about,” Karr said, his voice growing louder as he talked.

“At the end of the day, it makes no difference whose name is on your list. What ultimately matters is whose list can you ultimately get your name on.”

Karr was the guest speaker Monday night and he gave a rousing speech, one meant to fire up each of Monday’s big winners — local students that will be attending the University of Alabama in the fall.

The Bama Club gave out a dozen scholarships at the banquet totaling $21,000. The club, which was started in 1987, continues to add more scholarships mostly through its game ticket raffle in the summer and through the sale of University of Alabama car tags.

Karr told students they would need to do two things to be successful — holding true to their moral compass and planning to get up and go to work every day.

“If you’re going to be successful, you need to understand that it’s going to be hard,” Karr said.

“But hard is not impossible.”

Each of the students were grateful for the scholarship, which can only help as they pay for some of the high costs of a college education.

“I want to go to the University of Alabama because the slogan, legends are made, that just stands out to me the most,” James said.

“I believe going there will allow me to be successful and be the person that I really want to be and achieve my dreams.”

King isn’t entirely sure what she wants to study yet, but she always knew she wanted to attend the University of Alabama.

She said the money she earned Monday will be a big help.

“I’ve gotten several other scholarships but this is the one that I’m really excited about because it’s from Alabama, and it hits closer to home,” King said.

Dallas County High School’s Lyndon McGee made a 32 on the ACT and said he has nearly $1 million dollars in scholarship offers from various schools. He has been awarded the presidential scholarship and an engineering leadership scholarship from the university as well.

He plans to study computer science.

“It’s overwhelming. All the hard work in my life has paid off,” McGee said. “I’ve been working on this for a very long time.”

Karr challenged the students to work hard and see their lives come full circle in 20 years, where instead of receiving the scholarship, they’d be a part of giving out the scholarship.

“When you leave the University of Alabama you won’t be the same person as when you arrived. Thus, you’ll be better or you’ll be worse, you decide,” Karr said.

“What a lot of young people don’t recognize is this. As a consequence of you attending the University of Alabama, we’ll be better or we’ll be worse. You decide.”

Of course, the overall theme of the evening included a lot of crimson and white clothing and more than a few football references.

“I grew up in Alabama and it just feels like home,” Cain said of the university. “Roll tide.”