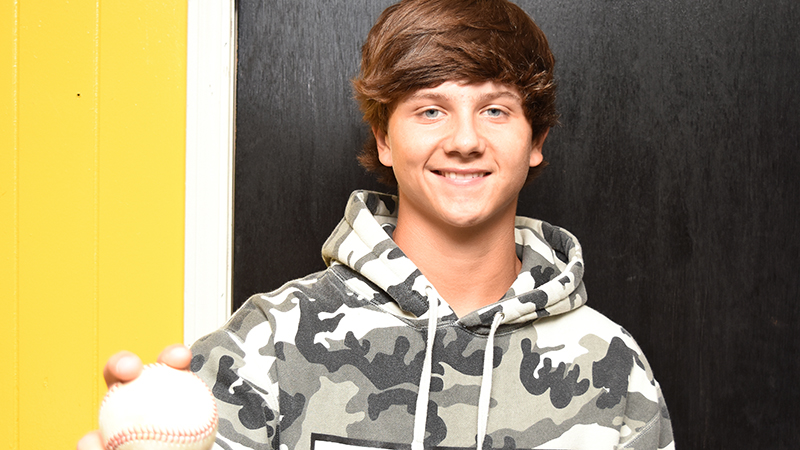 Meadowview Christian freshman Jeremy Lee poses for a photo Friday afternoon at the school. Lee and the Trojans will play in the Alabama Christian Athletic Association baseball semifinals on Friday in Tuscaloosa. --Daniel Evans

The Meadowview Christian School baseball team enters this week two wins away from winning a state championship. If the Trojans are going to accomplish that feat, chances are pitcher Jeremy Lee will have a lot to do with it.

Lee, a ninth grader, plays just about every sport Meadowview offers. As an eighth grader, he was the starting quarterback on the Trojans’ varsity football team. He also plays basketball — settling in as a 3-point shooter at guard — and runs track and field and cross country.

But none of those sports are his favorite. Lee, 15, prefers baseball and if he keeps improving, he could one day play in college. At least, that’s what he hopes.

It’s not often that a ninth grader is one of the leaders on any team, but that’s the case for Lee, who isn’t a normal 15-year-old. He prefers to have people look at himself as a leader.

“It helps me because it gives me a lot of confidence in myself,” Lee said. “Everybody else believes in me, and it builds character because everybody expects you to be the top leader. You can’t down anybody else. You have to pick everybody up.”

Lee has been a steady performer for the Trojans this year, consistently striking out 10 to 12 batters a game.

Meadowview has gone from a team that won only three games last year to the semifinal round of the Alabama Christian Athletic Association playoffs.

“Last year we were really young and we had a lot of people with bad attitudes,” Lee said. “Now we are a year older and next year we won’t graduate anyone, so hopefully we’ll be the same team. We’ll be better next year.”

Lee said he has a special feeling about this group, which has come together to surprise a lot of people.

“At the beginning of the year, at our first practice, I wouldn’t have thought we would’ve won a game this year,” Lee said. “Then, I don’t know how we did it but everybody got a lot better.”

Meadowview head coach Lebo Jones said Lee is one of the most talented baseball players he’s ever coached. He thinks he could play at the college level if he keeps working the way he has so far.

“For his age, he’s the best baseball player I’ve ever coached,” Jones said. “If he keeps improving, he’ll probably be the best I’ve ever coached. He’s really good and he’s just like another coach out there on the field. He knows the game inside and out and he studies it all the time.”

Lee’s favorite school subject is math, but when he’s not playing sports, he’d rather be in the woods hunting or fishing than anything in the world. He has one brother, two sisters and a step sister and his parents are Joey Lee and Lisa Easterling.

Chances are, a lot of his family will be in Tuscaloosa this weekend, cheering him and the rest of the Trojans on as they try to win the state championship.

Jones said Lee could pitch both Friday and Saturday, depending on how the games go and how he feels.

“I’m excited because this is the best year we’ve ever had,” Lee said. “We all want it bad. We’re hitting the ball. We’re hot right now. This is the best we’ve ever played, and I have a good feeling about this year.”