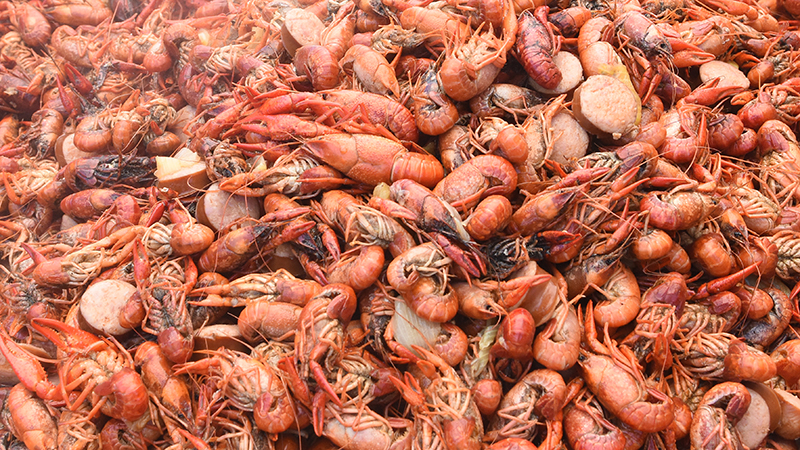 A portion of the 1,400 pounds of crawfish cooked Saturday is shown. --Daniel Evans

Members of the Selma Lions Club and other volunteers cooked up 1,400 pounds of crawfish and large quantities of corn on the cob, potatoes and other food as a fundraiser to bring in money for the Lions Club’s Sight Preservation Program.

“Loss of sight is a big issue everywhere,” said crawfish festival organizer Russell Haskell. “We raise money so we can help people locally in Dallas County and the majority of our money goes to Selma and Dallas County.”

If the crawfish wasn’t enticing enough, there were games set up all over the festival. The rock wall and petting zoo were among the most popular events. Live music was also played throughout the day.

“I think it’s just the festival atmosphere,” Haskell said. “People like to come out and spend the afternoon, we’ve got live music and crawfish, which is a growing food here in this area. Year after year, people are eating crawfish more and more.”

Haskell said the planning for Saturday’s festival started over a year ago and that organizing the 2018 event would start Saturday night, as they cleaned up. It’s easy to see why, just from the amount of food prepared alone. Along with nearly a ton of crawfish, the Lions Club and volunteers also prepared 400 ears of corn, 250 pounds of potatoes, 24 pounds of onions, 40 pounds of sausage and had 42 cans of seasoning.

An estimated 700 to 800 people were expected to attend Saturday’s festival.

Scott Haskell, another organizer, said the festival is a way to give back to Selma. He thanked all of the volunteers who gave up part of their weekend to help out.

“That’s part of what our organization, the Lions Club is trying to do, whether it’s the fair or the crawfish festival,” Scott said.

Harrelson always wanted to be teacher