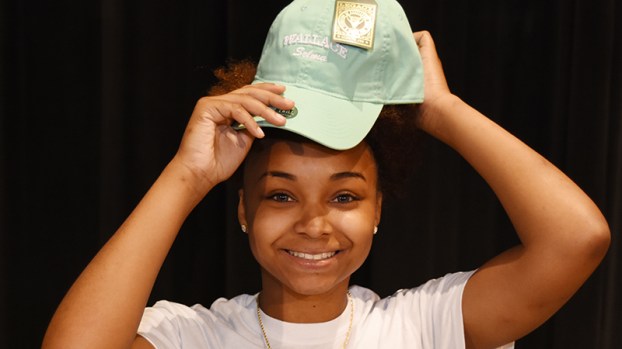 Selma High School senior Jamya Smith puts on a Wallace Community College Selma hat after signing with the Patriots Wednesday in the school’s auditorium. Smith made 303 3-pointers over the last four seasons for the Saints. --Daniel Evans

During her high school career, Selma High’s Jamya Smith was a deadly accurate 3-point shooter. Teams often shifted their defense to ensure she didn’t get a wide-open shot because when she did, it usually found the bottom of the net.

Wallace Community College Selma is hoping Smith can bring that same accuracy to the college level. Smith, a 5-foot-5 guard, signed with the Patriots on Wednesday morning at Selma High School’s auditorium.

“I’ve been wanting to play in college for a long time,” Smith said, just minutes after signing her letter of intent and putting on a light blue Patriots’ hat. “That was my plan, to play four years and then to come to the next level and try it for two years.”

Smith made 65 3-pointers this past season and 303 during the last four seasons. Her game is predicated to the 3-pointer and it shows in the stats. She attempted 959 threes during her career and only 277 two-pointers.

The Patriots know she’s an outside specialist and could use the help. Wallace was one of the worst 3-point shooting team in the Alabama Community College Conference last season.

The Patriots made 26.2 percent of their attempts from behind the 3-point line and attempted the third fewest threes in the conference.

“We try to recruit students that are good people and do well in the class, but you have to put the ball in the basket too and that’s one of the things we were lacking last year,” said Wallace coach Herman Turner. “We were the worst 3-point shooting team in the state last year, and we are trying to find some shooters. She fits right into that category.”

Both of Smith’s parents — Patricia Smith and Marco Storey — played basketball in college too, and had a large role in helping her better her game through the years. They both attended Lawson State, another ACCC school.

“It helped me a lot because they know a lot more about the game than I do,” Smith said of her parents. “Sometimes when I do something wrong they will come back and review it and tell me what I did wrong in the game.”

She also had a previous connection with Turner, who taught her at R.B. Hudson Middle School, so he knew she was a hard worker.

“She’s been in the gym working ever since she was in middle school, seventh grade,” Turner said.

Smith said she first learned to shoot like she does at the YMCA. Since she was the only girl on the teams she played on growing up, the boys would leave her open from the 3-point line.

“I was by myself and I just shot,” Smith said.

At the next level, opposing teams may want to think twice before they do that. Smith is planning on adding a few other skills to her arsenal before next season too.

“This summer I’m supposed to work on my ball handling, quickness — because I’m kind of slow,” Smith joked.

Rutledge to play in North-South game

Southside linebacker Ke’Andrae Rutledge will get to put on his Panthers’ football helmet one last time. Rutledge will participate in... read more