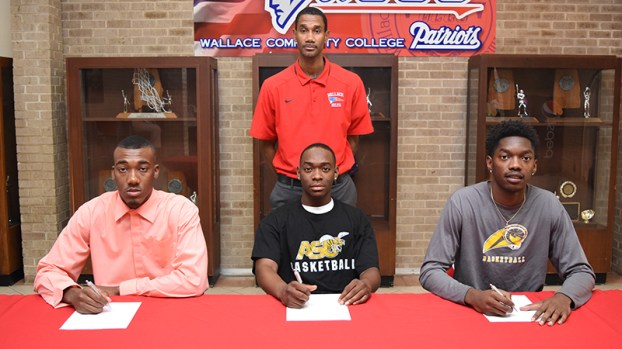 Wallace Community College Selma’s Kent James, Gene Davis and LaByron Harris were celebrated at a ceremony at the school on Tuesday afternoon. All three are moving on to play at a four year school. Wallace men’s basketball coach Duane Evans is standing behind the players in the photos. --Daniel Evans

Gene Davis, Kent James and LaByron Harris were honored at a ceremony at the school Wednesday afternoon. Davis will move on to Alabama State University, James will play Miles College and Harris is moving on to Blue Mountain College in Mississippi.

“With these guys, they’ve done a great job of working behind closed doors and developing their skills to be a better basketball player and a better man,” said Wallace men’s basketball coach Duane Evans. “It’s a win-win, a free education and a chance to play the game of basketball for two more years.”

Davis led the Patriots in scoring this year at 16.4 points per game and shot 46.8 percent from the field. Evans said he was one of the team’s leaders on and off the floor this past year. He shot 49.3 percent from the field and 5.5 assists per game. He scored a season high 31 points against Southern Union in November and consistently put up double figures all season.

Davis had several options, but chose Alabama State over West Alabama and Montevallo.

“It means a lot. It’s probably one of the biggest days of my life,” Davis said. “That’s every kid’s dream that plays sports.

“Gene is a coach’s blessing. We work with kids a lot but Gene has a gift from God,” Evans said. “There is a lot of things that Gene has that God gifts those gifts. He is a kid we will really miss next year. He played a huge part in what we did this year.”

LaByron went from averaging 2.4 points per game last season to 10.3 this past season. LaByron also averaged 6.1 rebounds per game and 3.9 blocks.

“At first, I didn’t get in much, so I thought I was going to be done here and go get a job, but I had a breakout year this year. This summer I worked on my game a lot and the second game of the season I dropped like 25,” Harris said. “I knew then that I could go all the way with it.”

James averaged 1.6 points per game and played sparingly this season. He played behind Zavieun Jackson, the second leading scorer on the Patriots this year. Jackson is also likely to sign a scholarship in the next few weeks.

“It was the offer I got,” James said. “I’m looking forward to becoming a better player and winning.”

Evans said James ended up in a position where he was behind a great player and the minutes just weren’t there. He thinks he can have a great career at a four-year school.

“His passion and his drive ended up getting him another two years to play basketball and go to school for free,” Evans said.