Morgan’s Harrison has 21 goals this year, but she’s already thinking of life beyond soccer 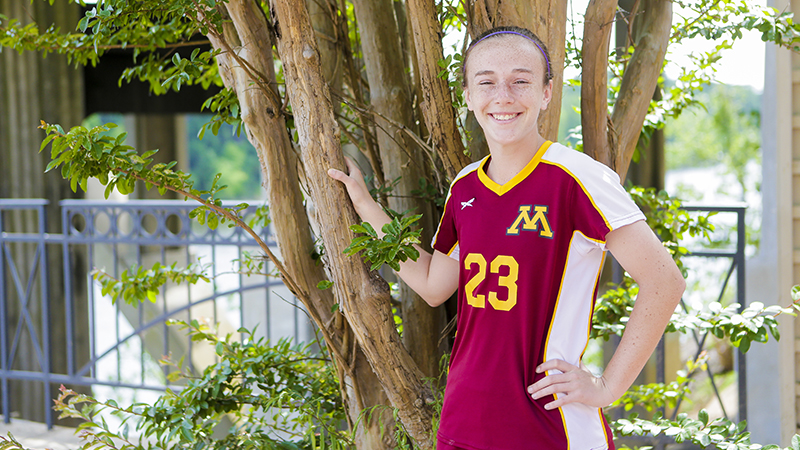 Morgan Academy’s Jordan Harrison poses for a picture Friday afternoon. Harrison has scored 21 goals this season and leads the Senators in scoring this year.--Alaina Denean Deshazo

The first-time Jordan Harrison played soccer she was a 3-year-old in a local church program and she hated it. It wasn’t that she didn’t like playing the games. It was the other factors, like a boy on the team that cried constantly and that she felt her parents were forcing her to play, that made her dislike it.

It wasn’t until years later that she realized how much she enjoyed playing soccer and how good she was at it.

“I think I realized I loved it when I was in seventh grade,” she said. “Then, I went to a soccer camp and loved it a little less, but probably once I started becoming captain or getting up in the team, I was more into it and that was about eighth grade.”

Harrison, now a sophomore, is now the team captain for the Morgan Academy girls’ soccer team. In 13 games this year, she’s scored a team-high 21 goals.

In the season’s opening game against Kingwood, on her sixteenth birthday, she scored seven goals — more goals than any other player on the Senators’ team has this entire season. That’d be a good season or career for many players, but for Harrison it was just one night.

“It was my sixteenth birthday so I was riding pretty high. I just kept going and didn’t want to stop,” Harrison said.

The school Morgan was facing that night was playing its first ever soccer game, so coach Winston Williams put her at goalie, so that she’d stop scoring.

She also enjoys passing to teammates, especially players still looking for their first goals. A lot of times she’ll see a special defense from the team Morgan is playing and she can’t get open.

She said she’s taught herself many of her soccer moves by watching Youtube videos. She’ll see a move she likes or a technique to try and then she’ll go out and practice it.

“Just like everything else, she really researches. She loves the game and watches players on TV,” said her mom Kathy Harrison.

For anyone that knows Jordan, it isn’t surprising that she studies soccer and works at bettering her game. That’s how she is with everything.

As a tenth grader, she already knows she wants to be a public affairs officer in the Air Force, and this isn’t just something she thinks she wants to do. Jordan has researched it extensively, looked at all her options and determined that’s the best plan.

“I’ve got about five different backup plans too,” she said.

“I usually have a plan. I have to know what time we have to be there, I’m going to be at least five minutes early,” Harrison said. “I will never be late to something and if I am it bugs me. I’m very punctual.”

She has a 4.1 GPA at Morgan Academy and hopes to attend Auburn University and go into the school’s ROTC program. She’s a huge Auburn Tigers fan and an even bigger fan of Tigers’ kicker Daniel Carlson.

Last year, her parents bought her a Carlson jersey before a game and she got to meet him.

“I met him at a game and he tweeted me happy birthday, so we’re basically friends,” Harrison said with a smile.

Harrison said she’s considered trying to kick for the Morgan football team, like Lauren Rutherford did a few years ago, but her dad, Tim, and Kathy understandably didn’t love that idea. Instead, she shows off her football kicking skills every now and then.

“I get out there with the boys and give them a few pointers,” Harrison said with a laugh.

Like Carlson, Harrison has a chance to play in college because of her footwork skills. Williams believes she can “definitely” play at the next level, if she wants to.

Harrison is thinking bigger picture. She’d enjoy six more years of soccer, but she knows the odds are against her making a professional team after that point.

“If I did club and went to college, I don’t know what the point would be if I didn’t go pro, so I don’t want to stress myself out for two years of high school and four years of college and not do anything with it,” she said.

Plus, she wants soccer to be fun and something she enjoys, not stressful work. That’s been the biggest change in her love for soccer over the last few years — she’s really enjoying it now.

This week Harrison is focused on trying to lead the Senators to an upset over Glenwood Academy in the first round of the Alabama Independent School Association soccer playoffs. Glenwood has won four consecutive AISA state soccer titles.

“We are going to have to walk in there with a good attitude and our heads held high,” Harrison said.

By the time the game kicks off Monday at 4:30 p.m. at Glenwood, Harrison will probably have a plan drawn up in her head as to how to attack the Gators’ defense. After all, she always has a plan.