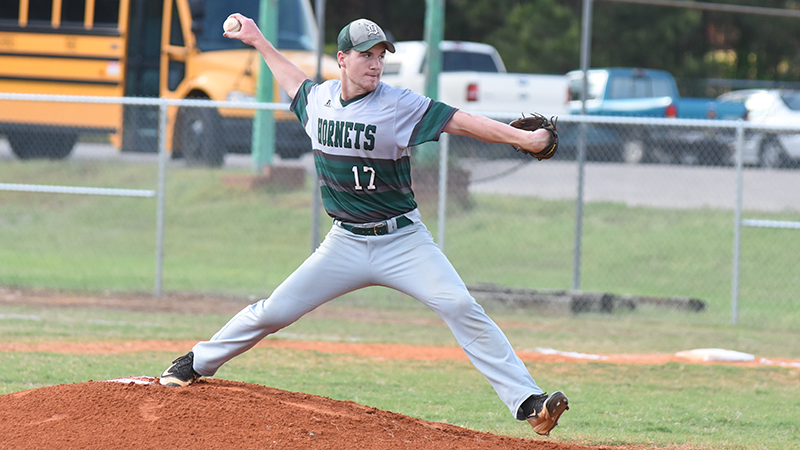 PLANTERSVILLE — It’s been several years since Dallas County won a baseball game against Demopolis, but on Wednesday afternoon the Hornets appeared to have the Tigers right where they wanted them.

Hornets’ pitcher Gabe Denson had limited the Tigers to only one hit through three innings and Dallas County trailed by only two runs going into the fourth.

But the Hornets’ bats just never got going.

Demopolis pitcher Hunter Colyar held Dallas County to only one hit and had 16 strikeouts as the Tigers won 8-0, clinching the class 5A, area 7 title. The loss means Dallas County will play on the road when next week’s Alabama High School Athletic Association playoffs begin.

“The score was not an indication of the game. They did a better job of getting runners on, getting them on but we made an awful lot of mistakes in the field,” said Dallas County coach Willie Moore. “Out of their eight runs, I’d say three were earned.”

Dallas County had its chances, but the Hornets struggled at the plate. Octavious Palmer had a single to lead off the fifth inning, but the Hornets didn’t put the ball in play many other times throughout the game. Dallas County hit into four ground outs and had a sacrifice bunt, but other than those six plays, Demopolis didn’t have to make a play on the ball.

“That’s not going to be good enough to beat a team like Demopolis,” Moore said. “We didn’t give ourselves a chance to win today because we didn’t do the little things that were necessary to win.”

Colyar was dominant on the mound, hitting the outside corners of the plate consistently and throwing a complete game. He struck out the side in the fourth and seventh innings.

Dallas County had its chances to stay in the game defensively, but Demopolis took advantage of every miscue. The Hornets had a chance to turn a double play in the first inning, but a mishandled ball resulted in two safe Tigers’ base runners. The next batter, R.J. Cox, hit a sacrifice fly to score Chandler Barton, putting Demopolis up 1-0.

In the third inning, Cox singled to bring home Demetrius Davis to make the score 2-0. The Hornets might’ve been able to get Davis at the plate, but no throw was made. In the fourth, after Denson had been pulled for Caleb Lester, Demopolis scored two runs on wild pitches to go ahead by four. The Tigers scored four more runs in the sixth, highlighted by a two-RBI single by Chandler Barton. Dallas County will host Paul Bryant on Saturday in its next game. Thursday’s scheduled game against Maplesville was cancelled.