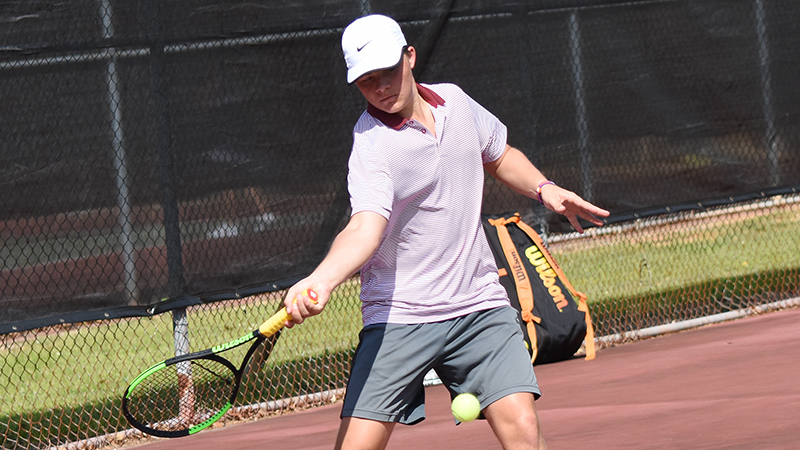 Morgan Academy’s George Jones warms up for his opening match on Monday. Jones and Will Brackin won in doubles. --Daniel Evans

The Morgan Academy tennis team entered Monday’s match with Evangel Christian School without a singles or doubles loss the entire season from their regular rotation.

That impressive streak came to an end on Monday, but the Senators were still dominant in the majority of their matches.

On the boys side, No. 1 seed Will Brackin lost a three set match to Trent Russell 6-3, 1-6, 10-8. Parker Cunningham also defeated No. 2 seed George Jones 6-2, 6-3. The rest of the Senators’ matches ended like they have the rest of the year — with Morgan as the winner.

“In junior team tennis, we’ve seen some of these kids, so we knew it was going to be a great match,” said Morgan tennis coach Baxter Stinson.

In doubles, Brackin and George Jones won 6-4, 6-3 over Russell and Cunningham, and Taylor Jones and Perkins won 7-5, 6-1 over Gissendaner and Braswell.

In doubles, Cain and Adams defeated Karcher and Motes 6-2, 6-3, and Sherrer and Talton won 6-3. 6-0 over Peterson and Friedlander. The Senators will play at Tuscaloosa Academy on Thursday in a match-up that typically serves as a prelude to the AISA state championship. The last handful of years, the title has come down to the Knights and the Senators.

“Right now, it’s everything,” Stinson said of Thursday’s match. “We’ve beaten everybody we’ve played except for the one team out there we worry about.”

The Senators are still undefeated against AISA competition this year. Evangel participates in the Alabama Christian Sports Conference, according to the school’s website.