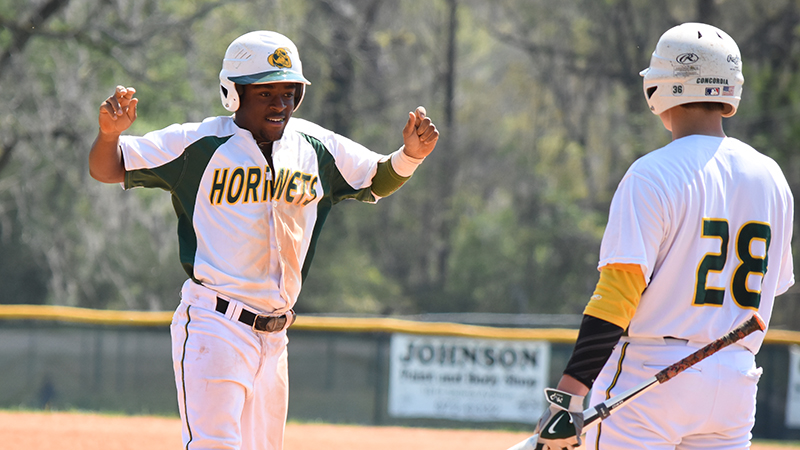 Voorhees College rallied Thursday to put the pressure on Concordia College Alabama’s offense. Needing a run in the worst way, the Hornets responded for a walk-off win that continued their recent streak of hot play.

Kelvin George’s walk-off double scored Mason Miller in the bottom of the seventh inning to give Concordia (7-20) a 3-2 win Thursday at Bloch Park in game one of a four game weekend series between the schools.

“We just kept fighting and wanted it bad,” George said. “We stayed up, continued to fight and came out with the victory.”

Most of the way, the game was a pitcher’s duel between Concordia’s Kelvin Gullatte and Voorhees’ Angel Guerrero. Gullate gave up only two runs in seven innings, and he allowed only three hits the entire game. Guerrero also had three strikeouts and gave up five hits.

Voorhees struck first on Jarious Whiten’s single in the first inning to go up 1-0. Landon Woody scored on the play after walking earlier in the inning.

The Tigers wouldn’t have much luck with their bats the rest of the way.

Concordia scored the game’s next two runs. The Hornets tied the game on a triple by George in the fifth inning. Much like the final inning, George’s hit scored Miller, who walked to begin both the fifth and seventh innings. Bryant Keel followed George with a single to center field, scoring George to give Concordia a 2-1 lead.

“Mason is like a firestarter for us,” said Concordia coach Curtis Wimberly.

At that point, with the way Gullate was throwing, it looked like two runs might be enough.

The Tigers had one final rally in them though. Joshua Jordan walked to begin the seventh and Darrius England doubled to right field to move him to third base. Lauritzen’s sacrifice fly tied the game. Gullate forced Brad Isaac to ground out to end the inning.

Concordia needed only two at-bats to answer Voorhees’ run, ending game one of the weekend series. Game two was played on Thursday afternoon and two more games are scheduled for Friday.

“This team has a lot of heart. They don’t give up and no matter what the score is we fight to the end,” Wimberly said. “This bunch of guys right here is one of the best that I’ve coached.”

Concordia’s record remains well under .500, but Wimberly said he can tell a difference in how the team is playing in recent weeks. It shows in the Hornets’ recent results too. Concordia is 5-6 in its last 11 games after a 2-14 start to the year.

“People are settling into their roles and just doing their job. It boils down to execution,” Wimberly said.