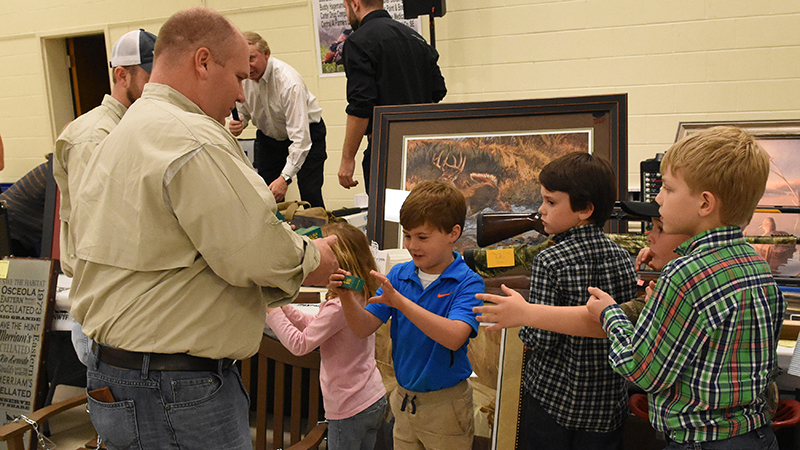 Hundreds packed the Carl C. Morgan Convention Center Friday evening for the National Wild Turkey Federation banquet. The banquet was hosted by the local Blaster Chapter and is one of the biggest fundraisers for the NWTF in the state of Alabama.

“We try to put on a banquet that is enjoyable, that is fun for both the kids as well as the parents and grandparents, where they can have a time to fellowship and learn about turkey hunting and more importantly about conservation,” said Jere Peak, who serves on the NWTF’s national board of directors.

The convention center floor was covered in tables Friday and the walls were lined with items for the silent auction. The food line wrapped around the building. Meanwhile, Peak announced the winners of different drawings from a stage at the front of the room. As expected, one topic dominated the conversation Friday night — turkey hunting.

There are nearly 2,000 banquets like the one held in Selma Friday night that are held throughout the country each year. Peak said those banquets raise 90 percent of the funds needed to accomplish the mission of the NWTF.

“The banquet system is vitally important of the economic well-being of the NWTF,” Peak said.

Longtime NWTF members are passionate about conservation and appreciate the work the NWTF has done through the years.

“Every group of people, hunters included needs some kind of organization to represent them to make sure they get to practice their sport in the proper way and don’t get interfered with,” said B. Lee Youngblood. “They do a lot of research and they do restocking of turkeys and they are very good conservationists.”

Tim Wood, another longtime member of the NWTF, said turkey hunters are passionate people and it shows.

Peak said the Blaster Chapter is one of 3 percent in the country that operates at the highest efficiency.

Athlete of the Week: Southside’s Johnson has high goals…