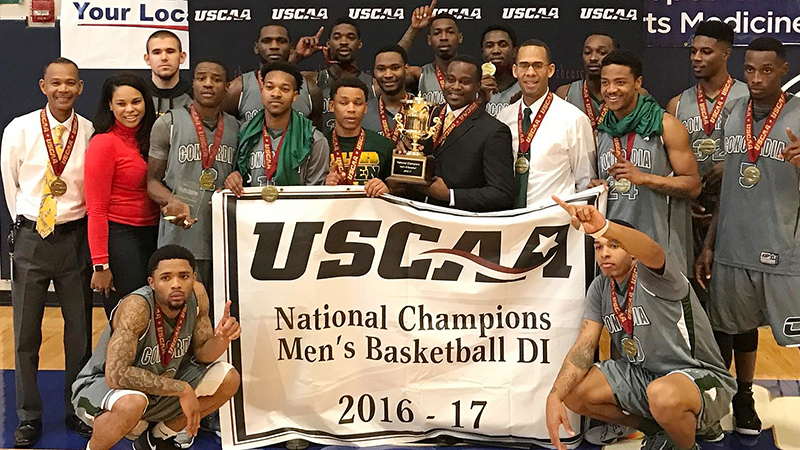 It’s only been two days, but all of the players involved in Concordia College Alabama’s weekend basketball championships have had plenty of time to reflect on what they accomplished Saturday in Uniontown, Pennsylvania. That’s the one positive about a 15-hour bus ride. 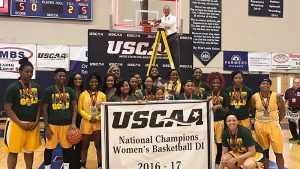 The Concordia women’s team poses for a photo after winning the USCAA’s Division I title. Coach Howard White is shown atop the ladder after cutting down the net. –Submitted Photo

“When it happened, I said we are probably the only school in Alabama to do it,” said junior Tavin Cummings. “I don’t know any place in Alabama where the men and women won it the same year.”

The school accomplished that incredible feat Saturday, with the Concordia men defeating Illinois Tech 61-51 and the Concordia women topping Berea 70-59. Both teams trailed in the first half, but rallied in time to win the United States Collegiate Athletic Association Division I basketball championships.

“They won so we couldn’t let [the men] down,” said Concordia senior Carshava Sutton, who went two-for-two in winning titles during her two seasons at Concordia.

The school plans to celebrate the teams’ achievement later this week, but no ceremony has been announced yet.

Last year, the Concordia men lost to Oakwood in the USCAA championship game. Dwight Waddell, the only senior on this year’s Hornets’ men’s team, said that loss served as motivation for the team this season, and it showed Saturday in the second half against Illinois Tech.

This time around the Hornets made sure to focus on defense and to make sure they brought the energy.

“That was one of the main focuses — defense,” Waddell said.

Concordia trailed by nine in the first half after an uncharacteristic start to the game. Coach Fredrick Summers said the Hornets were taking shots they usually don’t take. He told the team to go to the basket in the second half and to stop taking outside shots.

“We had the talk in the locker room like they are not really better than us,” said tournament MVP Dennis Miles. “We needed to stop shooting so much and start attacking.”

Miles had an outstanding tournament, shooting 30-for-47 in the tournament, averaging 22.7 points and pulling down 11 rebounds per game. He led three Hornets in double figures in the title game.

“The way he was playing, it was like he was a whole ‘nother person. He couldn’t be stopped,” Cummings said. “Nobody could guard him.”

Concordia outscored Illinois Tech 34-18 in the second half to rally back for the championship. DeQuarius Johnson tied the game 35-35 with a layup with 15:39 left and Concordia didn’t trail again. The Hornets started the second half on a 19-6 run.

After an overtime loss to Stillman on Feb. 1, Concordia senior Shuntavia Harris said the team was as its low point. Despite being the defending national champions and the top ranked team in the USCAA, the Concordia women had a tendency to let less talented teams stay in games and it’d finally cost them.  Against Stillman, Concordia turned the ball over 26 times and shot just 37.5 percent from the field.

“That is what ticked off the ticking bomb. Stillman, we underestimated them and although we knew we had the talent, we weren’t fully focused, so determination wasn’t even brought into the picture of the discussion,” Harris said. “After that game, I think that’s when it hit us. We are the No. 1 seed, we have to pick it up. We have to do better.”

Concordia didn’t lose again the rest of the season, finishing the year on a nine-game winning streak. The Hornets won their final nine games by an average of 20.1 points, but they were tested Saturday by Berea in the USCAA Division I Championship game.

Concordia trailed by nine in the second quarter and the Hornets were behind the majority of the third quarter before taking command.

“We knew we couldn’t get it back in one play, so we had to play good defense, rebound, push the ball, get down the floor, lay it up,” Sutton said.

Concordia’s experience in the championship game ended up being a deciding factor down the stretch.

“We were built for it,” Sutton said. “It’s all a mental thing, and we held it together.”

Going into Saturday’s championship game, Harris was averaging 21.5 points and 12 rebounds per game in the tournament, both above her season average.

The Hornets have plenty of players who can beat you — fellow senior Lashanique Youngblood had a triple double in the semifinals —  but Harris was clearly the player teams knew they had to shut down. It’s not easy, but Berea found a way to slow Harris Saturday, holding her to 9 points, 4 rebounds and 7 blocks.

“This team brought everything they had. I’ve always been known for a double-double, but the last game, I’ve never been beat up like that on the court,” Harris said.

With Harris held well below her season averages, an unlikely hero stepped up for Concordia. Freshman Traniya Pitts, who averaged 5.4 points per game this season, scored a career high 23 points on 8-of-12 shooting. Pitts was named the MVP after scoring as many points in the title game as she had in her last four games combined.

“I wanted the game so bad because in high school I went to a championship too and we lost,” Pitts said, speaking of her time at Central Tuscaloosa High. “I was just so hungry to get a ring. I wanted that game so bad.”

“She was a big factor. From a scale of 1-10, I’d give her a 100 because it was her 3s and her energy that actually uplifted the team,” Harris said of Pitts.

Harris missed the first half of the season because she had one semester of eligibility left and the Hornets lost three seniors off the women’s team that won last year’s title.

“It means a lot because many people said we wouldn’t get there again without our three seniors from last year,” said Concordia senior Lashanique Youngblood, who grew up in California before transferring to Selma. “We proved them wrong. I put it mainly in coach White’s hands. Coaching women is not an easy thing to do and for this to be his second year doing it, it just shows a lot about him.”

White actually served as an assistant coach for the Concordia men’s team and was the head coach for the women, so he cut the nets down twice Saturday. Summers won his first championship after guiding the team to four trips to the USCAA Championships.

“It meant so much for everybody. Everybody wanted it because everybody comes from different parts all across the world and they’ve been playing basketball for so long,” Youngblood said. “Everybody had a humbleness and excitement and were just thankful for it all.”