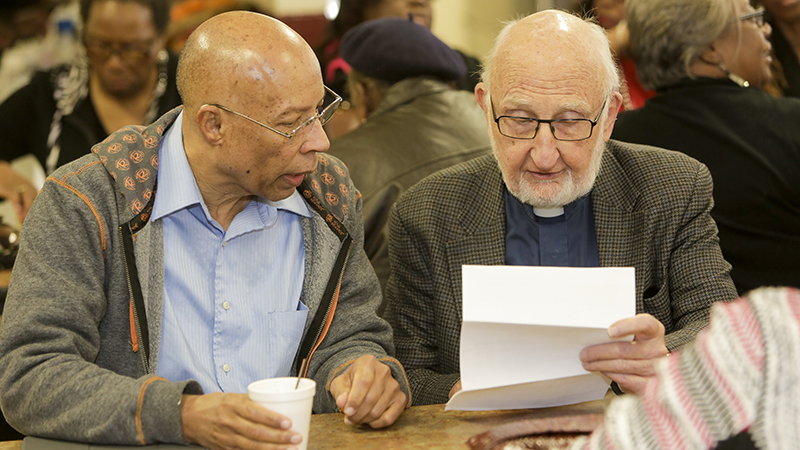 Although the marches took place 52 years ago, foot soldiers from the 1965 voting rights movement still make their way to Selma every March to remember and commemorate the struggles and triumphs that were made for equal rights.

During a breakfast in their honor Saturday morning at R.B. Hudson Middle School, the marchers reflected and some spoke about their time previously in Selma.

“It occurred to me about 12 or 13 years ago that we were having the Jubilee and the most important part of the Jubilee was being left out and that is you,” Charles Mauldin, a foot soldier, said to the crowd. “We started this breakfast because nobody heard your stories.”

Mauldin said he wanted to give the foot soldiers an opportunity to get together, reunite and share stories from the past because it was them that changed history in 1965.

“What was unique about the movement is that little people became extraordinary,” Mauldin said.

Dr. Mae Christian, who now resides in Miami, still remembers the horror of marching in Selma on Bloody Sunday.

“My experience was terror,” Christian said. “When we were headed across the bridge, we realized that the sheriff and a lot of police were mounted on horses with dogs, hiding behind the building. I wasn’t in the front, so when we saw the commotion, I went to running and I was able to run fast enough to get back to [Brown Chapel AME].”

Although Christian wasn’t hurt herself, she saw the number of people that were injured in the march and it led her to continue to fight for hers and others rights.

“We still have to push,” she said. “Hopefully we will be able to overcome eventually, and I’m here with the inspiration of 52 years ago. I’m still marching, I’m still hoping and I hope that change will come for America to understand that we are all one human being, one nation under God and it should be respected that way.”

Jack Singleton, who drives from North Little Rock, Arkansas, every year for the Bridge Crossing Jubilee, still remembers what brought him to Selma when he was only 24 years old.

“I was in seminary at SMU [Southern Methodist University] at Perkins School of Theology and we saw the horrible footage on television of the marchers being gassed and beaten and that was on Bloody Sunday,” Singleton said. “Later that day, Dr. [Martin Luther] King Jr. issued a call to ministers around the country to come and stand with the people of Selma. So myself and four of my classmates decided to make the trip.”

When they arrived, they went to Brown Chapel AME where they were given instructions on what to do if they were faced with adversity, like that of Bloody Sunday where people were beaten and gassed and not able to march to Montgomery.

The day that Singleton and so many more marched would be later known as Turn Around Tuesday, where Martin Luther King Jr. led the more than 1,000 marchers from Brown Chapel to the Edmund Pettus Bridge, and eventually turned around.

“The marching was eerie because the crowds had been really ruckus on Bloody Sunday, but they were silent as we marched,” Singleton said.