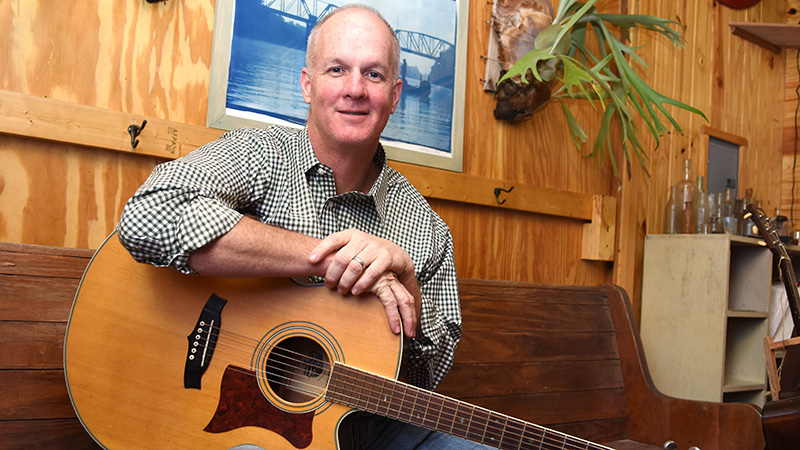 Paul Garner poses for a photo with his guitar at Edger and Amy Reeves’ house.

Selma musician Paul Garner will be the first to tell you that he’s not sure where his music career is taking him. He’ll also tell you he doesn’t play to get rich and he’s not planning any one-way trips to Nashville, Tennessee any time soon.

But he does know he’s having a lot of fun, even if it hasn’t played out the way most music careers usually go.

“I did everything backwards. This entire music thing has happened backwards,” Garner said with a laugh.

Over the last year, Garner has started to see his music begin to take off. A year ago, he’d never really considered writing and playing his own songs, but in December his first album, titled “First Time Out” came out and is on sale at Queen City Market, Mark’s Mart and Gallery 905.

He didn’t learn to play the guitar until he was 35, when his dad Walter showed him the strings. Paul said his dad had always offered to teach him how to play, but he’d never really considered it until then.

In the years that followed, he’d never really thought much about writing and playing his own songs, or even creating his own album. That all changed in the latter part of last year.

On Labor Day 2016, Garner and his children, Sam and Fairchild, were at the Sand Bar listening to Bubba Hall perform. Hall, who organizes a monthly Guitar Pull at the Cloverfield Playhouse in Montgomery, got to know Garner after his performance.

Weeks later, Garner received a call from Hall, who’d had someone pull out of his December show. He wanted to know if Garner was interested in playing.

“As soon as I said sure, the gravity that I didn’t have but two or three songs written that I could sing because you sing your own stuff,” he said. 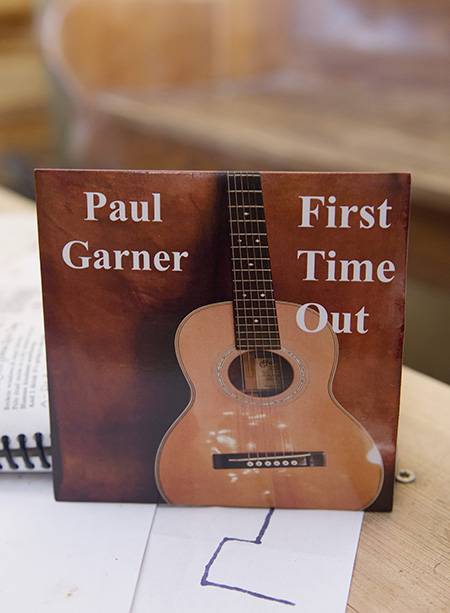 Paul Garner’s first CD came out at the end of 2016 and is on sale at Queen City Market, Mark’s Mart and Gallery 905.

Over the next few weeks, Garner started working on his song collection. Every time he’d see something worthy of a song, he’d whip out his phone and record the lyric by singing into it.

“I don’t know anything about writing music like notes on a page,” he said. “All I do is hear a tune and then I try to place the chords around that. I do the music part based on the tune that comes in my head with the lyrics.”

Eventually, a couple of songs started to come together. Then a fourth, a fifth and a sixth. They covered a variety of topics, from bad relationships to love and poor judgement.

He started recording them on his phone and playing them back to find any errors he made.

“I tell people jokingly that I play all kinds of music — rock, rap, classical, pop, jazz — but they are all going to sound country,” Garner said.

Some time closer to his performance, Garner received another call from Hall to hash out the details of his performance. Hall told him that the Cloverfield helps the artists who play there by merchandising their CDs.

Garner had never really considered creating an album, but at that point, he knew he needed to figure out how. Thanks to technology, it didn’t take him long.

“How do you start doing everything?” Garner said. “Google.”

Garner found a website where you create an album by uploading songs, creating album art and ordering however many copies you need. Just a few weeks later, he had a CD of his own creation in his hands.

“I liked it and thought it was neat and quite an accomplishment and pretty cool, but the kids loved it,” he said. “I spent [that first] Saturday morning sending and delivering them to a few friends that I thought would want one and a few people that offered to buy one.”

A few days later he performed at the Cloverfield in front of a big audience, including around 40 friends and family members from Selma that had made the trip.

“If I imagined it would be a 10 on the scale of grandness, it was a 12,” Garner said. “But, I went to work the next morning and got there at the same time I always do.”

Since then, his music has been made available on iTunes, the Google Play store and Napster, among several others. His songs “Fire” and “Bad Habits” are his most popular. So, where does Garner want his long-term goals to be in music? He’s honestly not sure.

“I haven’t really thought about what my ultimate goal would be. I did not start writing songs for financial gain,” he said.

Garner isn’t sure what’ll happen in the future. Maybe at some point, he’ll have a song get on the radio, or maybe he’ll even produce a big hit. Who knows.

“My goal is to continue to write songs when they become available. I will continue to keep myself open to opportunities to write songs,” Garner said. “My plan is not to turn that off and I think like anything else, the more you do it, the better you become at it.”