Jubilee organizers: We will not pay $24,000 for city services 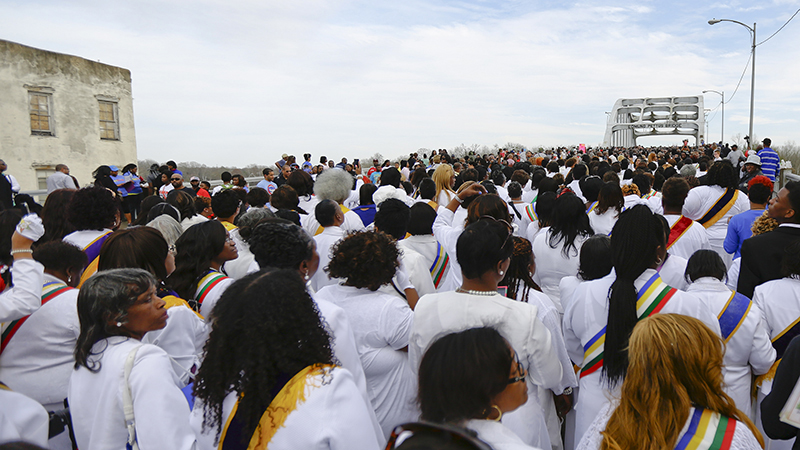 This year's Bridge Crossing Jubilee is set to start Thursday, March 2 and go through the annual bridge crossing Sunday, March 5.

Organizers of the annual Bridge Crossing Jubilee say they will not pay the city of Selma to hold the annual four-day festival next week.

Senator Hank Sanders said Wednesday the city is asking organizers to pay $23,882.02 for police and other city services during Jubilee, which will take place March 2-5.

“We will not pay in 2017 to commemorate sacrifices made and celebrate victories won in 1965,” Sanders wrote. “Selma is a symbol for freedom the world over …The idea of finance is a ruse to stop the commemoration and celebration of one of the most historic and seminal events in this country. This is about politics, not money.”

Sanders and his wife, Faya Toure Sanders, argue that a large number of the 40-plus events have no cost to the city, so they feel the Jubilee should not have to pay.

“Friday, we have workshops all day long at the junior college. The city of Selma has nothing to do with that,” Faya Toure said. “What are we paying for? If you break it down, we are paying for two days. On the letter, it says five, [but] we are paying for Saturday and Sunday.”

Selma Mayor Darrio Melton said the city is asking to be reimbursed for city services organizers should’ve always been paying from the beginning.

“I think it’s shameful that Senator Sanders is calling on the foot soldiers and others who were on that bridge in 1965 to justify his personal desire for personal profit off that event,” Melton said. “As mayor and a citizen of Selma, I respect the blood that was shed on Bloody Sunday. In fact, my grandmother was on that bridge in 1965, and I too do believe we should honor our legacy as the birthplace of democracy, but the Jubilee itself — and that’s what many of us in Selma know — is not about just marching across that bridge. You have vendors, you have stepshows, you have beauty pageants and concerts that cost money to put on.”

Melton said the city has met with Jubilee representatives at least six times, but said organizers aren’t willing to pay. Melton said the city originally asked for $35,000, but modified some of the services it would be providing to get the price down to just over $23,000.

“We were willing to go further to work with them to modify some of the services and that $23,000 came from the modification,” Melton said. “They have yet to say they are willing to work with us, and I think it’s good for the public to know they don’t want to work with the city, they don’t want to move forward. They believe they should get all these services for free when no one else could come into this town and ask for the same thing. It’s just disingenuous of them to ask for that.”

The annual Battle of Selma Re-enactment, which was scheduled for April, was cancelled last month after organizers were asked to pay $22,000 for city services. Faya Toure said the Jubilee offered to pay for the services it needed and provided the Times-Journal with a list totaling $3,265.90.

The largest expense on that list was for the Jubilee festival on Saturday, where they asked the city for six crossing guards and six police officers to direct traffic, a fee they estimated to be $2,147.64.

“We didn’t say we wouldn’t pay for anything,” Faya Toure said. “We said six crossing guards, so many police officers, and we would pay for the cleanup. They rejected that.

“We don’t make any money worthwhile from that festival,” Faya Toure said. “At $12 you can’t make that much money unless you get a lot of sponsors and we don’t get sponsors like we used to.”

Melton said the bill has almost nothing to do with Sunday’s bridge crossing.

“It’s not about Sunday. Senator Sanders wants people to believe it’s about Sunday. It’s about Thursday, Friday and Saturday,” Melton said. “Those are the costs that they are asking us to eat up in our budget. Just like they have a budget, the city has a budget that taxpayers provide for us on an annual basis. We would be bad stewards if we allowed someone to dictate to us how we should spend citizen’s money based off how a private event is saying we need to spend it.”

After the Battle of Selma was canceled, Faya Toure said the Jubilee would hire its own private security and said the Nation of Islam had committed to help with security.  She said they’d hire people to clean up as well.

“They have emphatically said they will not pay for services, yet they will pay for private security, which means they are double talking,” Melton said. “I think what the senator is giving what is considered alternative facts, not telling people the real story on what’s really going on here. It’s not about marching for him. It’s about money.”

Melton said if organizers do not pay, they won’t have the proper permits to hold certain events, like Saturday’s parade, and the streets will not be closed.

“They cannot block traffic just because they want to have a parade,” Melton said. “If they do that, it’ll be a violation of our ordinances, and we’ll have to proceed as we have to.”

Melton said if ordinances are violated, he will defer to Selma Police Chief Spencer Collier.

“I trust my chief on how to respond to that. As a city, for too long we’ve let people have us at this stalemate,” Melton said. “It’s time for us to move forward and to be the city that we so often talk about that we are.”

First responder of the week: Moten new to Selma…