Earning her stripes: Witherspoon does it all for Dallas County 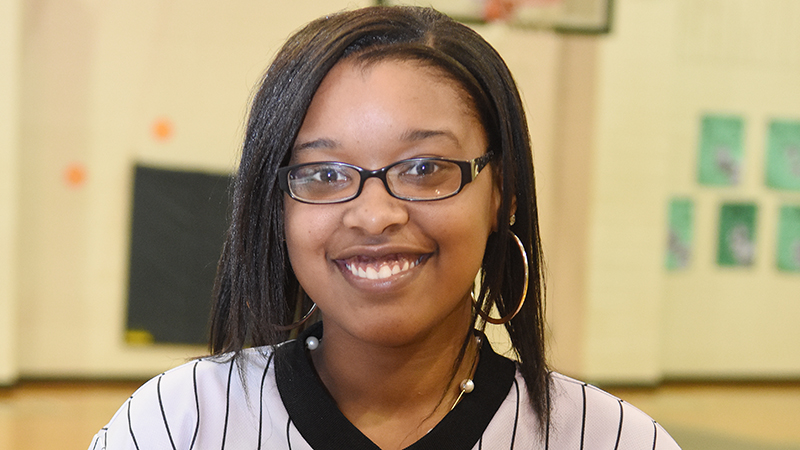 You won’t find Tamia Witherspoon’s name on the stat sheet after a Dallas County High School basketball game, but her fingerprints are all over the team’s success.

Witherspoon has served as Dallas County’s bookkeeper the last two seasons. She travels to almost every game with the team, attends practices and helps wherever she can.

“I’m not an athlete so I wanted to tie in somehow with the basketball team,” Witherspoon said. “My sister actually did it too when she was in high school, and I saw how she enjoyed it, so I wanted tie in with it too and I enjoy it as well.”

She went to coach Charles Thompson during her tenth grade year and asked if she could help the basketball teams. Dallas County didn’t need any managers, but they needed a bookkeeper and that was right up Witherspoon’s alley because she loves math.

“Now I feel like a pro at it. I love it. I love the excitement. I love getting ready because I feel like a basketball player and I like helping them out, even if they need anything like water or towels,” she said.

Ironically, she spends a large portion of her life wearing a referee shirt, although she’s not a referee. Witherspoon wears the familiar grey and black striped shirt for games, but she also has a part time job at Foot Locker.

“I have a black and white [uniform] and it’s just like my Foot Locker shirt,” she said with a laugh.

People that haven’t kept a book often don’t understand how difficult it can be. Witherspoon keeps Dallas County’s B-team, varsity girls and varsity boys’ books, so she’s constantly keeping up with who scores while updating the numbers.

“Even when it’s halftime or there’s a timeout, I go back and make sure the numbers are correct because when I have the home book, everything has to go off of me,” she said. “I make sure I’m correct and being fair. I make sure the other team has everything and if I make a mistake, we always have a conversation and make sure both of us are on the same page.”

She said one of the first things she learned as a tenth grader was to not tell the players how many points they’d scored.

“The very first game my tenth grade year, they were like ‘oh my gosh Tamia, you’re best friend, just tell me how many points I had,’” she said. “I can’t do that because when you start doing that they start being selfish and I want them to think as a team. They don’t do that anymore because I just shut that down.”

There will be a lot written in the next few weeks about seniors playing their last high school basketball games, but Witherspoon, a senior, is in that same boat.

If Dallas County’s boys keep winning, she’ll get to keep serving as the bookkeeper.

“I’m really going to miss it. Senior night I held back my tears. People may say ‘Tamia, why are you crying, you haven’t done anything’ but it’s the fact that I’ve been with the basketball team since day one,” she said. “Every time they had a practice or they were working out or getting ready for the game or on the bus. I felt like a part of the team.”

Dallas County coach Willie Moore will be the first to tell you how important Witherspoon is to the team.

Witherspoon plans to go into the Air Force when she finishes high school. Her parents are Aretha and Earl Witherspoon.