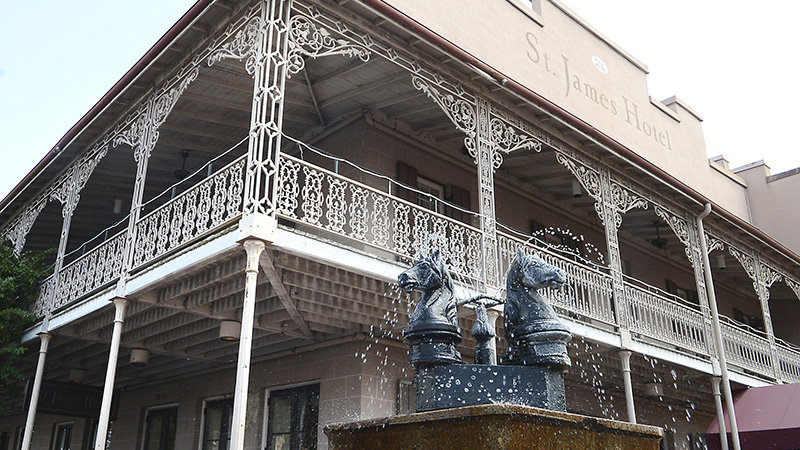 FUBU has made an offer to purchase the St. James Hotel from the city of Selma for $400,000 and have pledged to invest $3 million in capital improvements and renovations.

After recently receiving an offer on the St. James Hotel, the Selma City Council voted Friday to authorize Mayor Darrio Melton to negotiate with the proposed buyer.

The offer came from FUBU for $400,000 and at least a $3 million capital investment in improving and renovating the historic hotel.

City council members went back and forth Friday on how much they wanted to sell the hotel for. The hotel, which is listed with Hotel Assets Group for $1,100,000, was appraised for $900,000.

Council President Corey Bowie said he would like to sell the St. James for at least $500,000.

“You cannot run a city like a business, but you can run a city off business principles, and that’s the whole concept of what we’re trying to do, get the most vested interest for the city as a whole,” Bowie said.

Councilman Johnny Leashore seemed to lean towards accepting the offer of $400,000.

“This hotel, the St. James, which is owned and operated as we speak by the city of Selma, is killing our general fund budget,” Leashore said. “And this hotel needs to be liquidated. It needs to be sold.”

Leashore said the hotel has cost the city too much, and they are responsible for being good stewards for taxpayers’ money.

“Truth be told, we’ve spent over $1 million maintaining this hotel,” Leashore said. “I would hope and pray that those of us that are here would have the courage enough to move forward.”

Council members Carl Bowline and Angela Benjamin agreed with Bowie about countering the offer because the city has put so much money into the St. James. The city will also have to pay the realtors $70,000 regardless for how much it is sold for.

“What happened in the past is that we quickly wanted to move, and we moved quickly on [an offer] that we thought was it, and then it came about that two prospects might not have had the money to invest,” Benjamin said.

Benjamin said the council has to protect the value of the hotel because of its history and because they want it to be a focal point of downtown Selma.

Melton said if the hotel is not sold, the city will have no choice but to close it.

“If we do not move forward with selling the hotel … we will have no choice but to close the hotel. We just can’t afford it in our budget,” he said.

After deliberating about prices, the council passed a motion to give Melton the authority to negotiate with FUBU to sell the hotel for more than $400,000.

The council also voted to outsource legal services for the selling process to Gamble, Gamble, Calame and Jones. The council agreed to pay the law firm $200 an hour with an initial cost ceiling of $8,000. If more work is needed, it will come before the council.

FUBU is a clothing company that was started in 1992 by Daymond John, who now stars on the television show Shark Tank.

According to FUBU’s website, one of the company’s founders, Carl Brown, launched a commercial development venture in 2017 called Erudite Hotels and Residences, which is a “boutique hospitality brand.”

The Times-Journal plans to reach out to FUBU for comment about their plans for the hotel Monday.