Top ranked Concordia pushed to limit by shorthanded Selma U 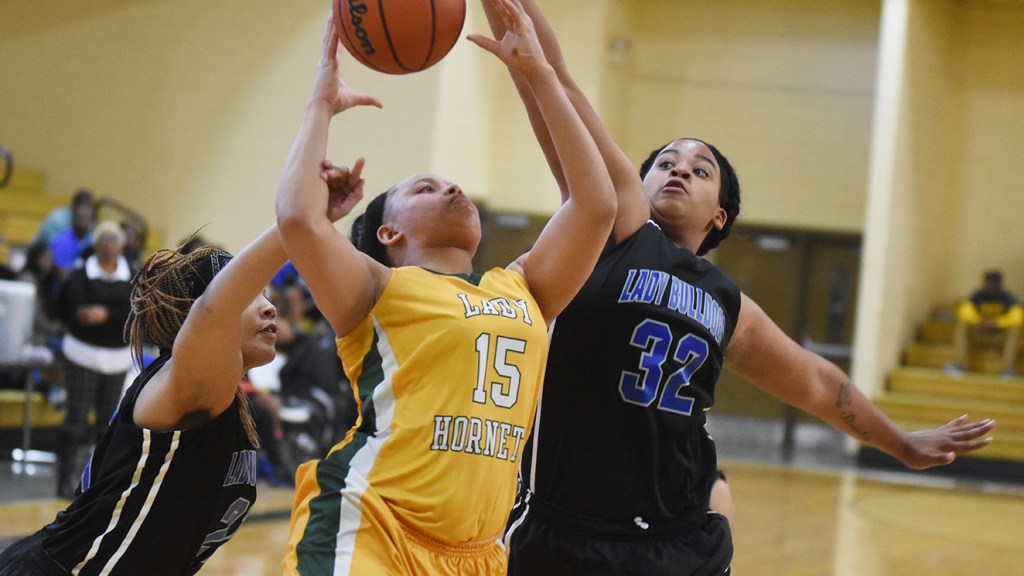 Shorthanded Selma University gave top ranked Concordia all it wanted, plus some, Saturday on homecoming for the Hornets.

A day all about celebration for Concordia (17-4) turned into a four quarter battle against a Bulldogs’ team with only six players. Concordia held on for a 62-47 win, thanks partly to the dominant inside play of Shuntavia Harris, who scored a game high 23 points, but head coach Howard White was less then pleased with his team’s performance.

“We played down to our level of our competition. That’s just what we do,” White said. “We just didn’t play well today… We’re at home, we’ve got our family in the stands and we’re more concerned about what we are going to do after the game than what we are doing in the game.”

Concordia, the defending USCAA Division I National Champions, are currently ranked No. 1 in the USCAA rankings and showed Saturday they can win without their A-game.

Teondra Crawford made four 3-pointers and scored in double figures with 14 points. Kimberly Clark also had 8 points for the Hornets, who led 32-28 at the half.

Selma University coach Erica Heard was proud of her team’s performance. The Bulldogs have been dealing with a rash of injuries, leaving them with just enough players to even compete. Last week, Keshay Steele tore her ACL and on Saturday Yamaya Leonard had transportation trouble and was late to the game, leaving Selma with only five players for the first half.

“They have a heart of champions. Regardless of what has been thrown at us, we still have to finish this race,” Heard said. “We can’t give up. There’s no giving up and I tell them every day that we are still going to stand strong, we are going to fight.”

The Bulldogs certainly did that, sticking with Concordia until a late, Harris’ led run, put the game away. Tayanta Griffin scored 23 points to lead Selma University.
Concordia 87, Selma University 64 (Men)

Concordia ended a two game losing streak Saturday against Selma University with an 87-64 win. The fifth-ranked Hornets led from the outset and didn’t trail the entire way in a dominant performance. Concordia had lost back to back games to Florida National and Stillman College.

“Defensively, we wanted to not allow them to get to anything comfortable and to take away passing lanes from them,” said Concordia coach Fredrick Summers. “I think the guys did a very good job of doing that within our press.”

The Hornets jumped out to a 27-point lead in the first half and led 48-25 at halftime.

Ryan Watkins led the way with 21 points, with eight of those coming in the first half. Selma University pulled within 53-36 early in the second half, but Watkins made two 3-pointers to put the Hornets firmly back in control.

Tavin Cummings scored all 10 of his points in the first half and Deangelo Anthony chipped in 17 for the Hornets.