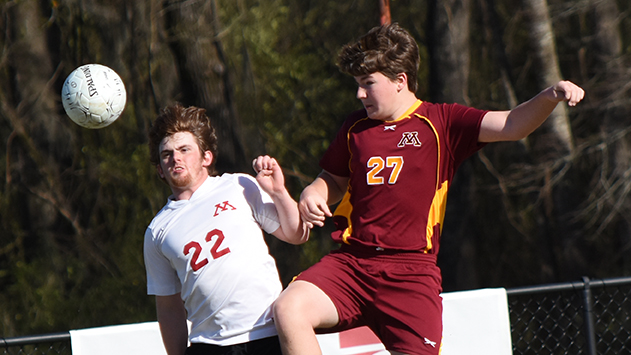 To prepare for the upcoming season, the Morgan Academy soccer team turned to some former Senators, who gave them their best shot.

Morgan held its annual alumni game Saturday and many former players came back to compete in the game. The Senators don’t technically play their first game of the season until Feb. 7 against Macon East, but Saturday was a great chance to get in some extra work.

“I think this is the third year we’ve done this, and I think we’ve got a great tradition going,” said Morgan boys soccer coach Jay Minter. “I wish more could make it back, but most of our alumni are still in college and they are dependent on their college schedule and their college social schedule.”

The alumni team ended up having nine players for the boys’ game and Minter played goalie.

“I am alumni of the school, so I did qualify,” Minter said with a laugh.

The score wasn’t the focus, but Harrison Watters led the alumni team with two goals. Wade Mason and Ansh Shaw scored one goal each for the Morgan Academy team.

In an effort not to wear the boys’ team out, the games were reduced to 60 minutes instead of 80 minutes and the field was shortened 20 yards.

“They’ll have plenty of soccer today,” Minter said. “The more they can get as long as they don’t get hurt the better.”

The Senators’ boys are going to be a young group in 2017 and right now Minter is still looking for more players. Morgan only has 11 players right now, so he’d like to add a handful more. Right now, Minter said the team is having to be careful during practices because they can’t afford injuries that would further weaken their depth.

“We’ve had to make the balance between trying to get as much practice as we can, while trying to make sure we don’t get anybody else hurt,” Minter said.

The team has two seniors in Frank Thomas Middleton and Phillip Goodson, who are both playing for their sixth season, so Minter will rely on them heavily.